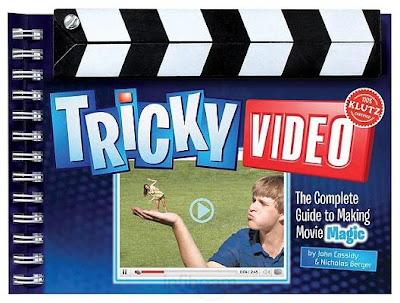 Sometimes it's fun to be the grumpy old man and talk to kids about what life was like back in the stone age. Before streaming and downloading, before DVDs, before VCRs, heck, even before cassette tapes! It's fun to see them try and imagine how different things were, and then to watch their faces cringe in horror when they try to compare their present day lives with "way back when."

"You must have been so bored! What did you guys do?"

The same things kids do today: make movies. Only it was with film, and it was expensive, and we didn't have YouTube to upload it to. Still, we made goofy films.

Pretty much everything in Klutz's Tricky Videos is stuff we did back in the day. In-camera edits and forced (or false) perspectives and clever editing tricks – yup, old school. But then, everything old is new again, as always.

It sure would have been a lot easier to have had this book though, and some of the technology to go with it.

We would haunt college short film and animation festivals. They would be Friday or Saturday night affairs in some large campus building, a nominal fee at the door, and hours full of filmed lunacy. Things like counter-top fruit singing Papa Oom-Mao-Mao or even something classy like The Wizard of Speed and Time. Afterward we would be hungry to try and do some of the things we saw, or argue how some of the effects were accomplished. We also read magazines of filmmaking and special effects, or articles about how the films we watched had been produced, so among us we usually had enough knowledge to pull off these tricks.

Tricky Video collects some classic short film effects gags and teaches readers how to achieve the effects, complete with suggested storylines. Much of what's here can be viewed in YouTube, either as a result of this book or simply because they are fairly common, and Klutz even has some specially made links that show the effects in action. There's the faked fight scene, the tiny person in the palm of your hand gag, pixilated drag races, and, of course, talking fruit. Sound effects are covered, as are the finer points of camera placement and staging. It's a good place to start for an aspiring middle grade movie director. Even comes with it's own clapper, thought totally unnecessary in this day and age when sound is recorded with the video or added as an effect in the editing. Naturally, active young filmmakers will quickly master these scenes and come to create other, more complex gags and set-ups.

I realize that Klutz isn't the place, but this kind of book – with it's clear color photo instructions and online video links to show you what the final result looks like – could do with a couple solid follow-up guides. Like one on making tricky horror effects videos, and especially on writing good movie stories, whether comedy, horror or drama. It is too easy to just grab a camera and shoot gags and share them for a quick laugh. It's also too easy for budding filmmakers – and some professional ones as well – to stop at the image and learn nothing about crafting good stories.

That's the truly tricky part.
Posted by david elzey at 5:54 AM