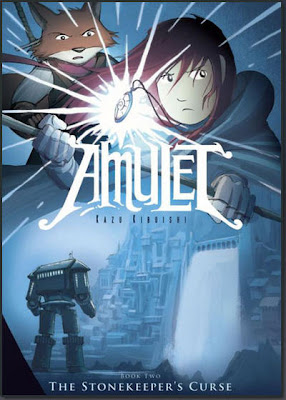 Here's a problem. If you're an author of a series, you would want your readers to have such vivid memories of your previous books to be able to delve right into the new one and get their bearings instantly. But, if you were creating a strong, well-developed story and it was taking you longer than they usual book-a-year grind that most series require, you would hope the readers would not only be patient but willing to dive back and reread your earlier books as well so they can savor the newer book better.

But, if we're talking about younger readers, how long can we expect their interest to hold over time? If they have dozens of new titles coming at them all the time, and especially as the graphic novel format gains ground in publisher's catalogs, can they be expected to wait anxiously for a drama to unfold and still maintain interest? Will their tastes be the same, will the reader be the same, at the end of it all?

I'm thinking back to how Harry Potter carried an entire generation of readers over the course of a decade and how well it would have fared without a fanatical following and movies to keep interest buoyed. More recently the Wimpy Kid phenomenon holds its ground by shrewdly following what I call the Madonna Cycle; every nine months, without fail, Madonna appears in the news one way or another. Either she's released a new album, or she's adopted a child, started a new business, whatever. Madonna, better than anyone else I can think of, has mastered the art of staying in the public eye for almost 25 years. This constant draw of attention, not too often and not too far apart, is what keeps a brand alive. And ultimately, if publishers would look a little closer at this, could garner better sales for them.

I know I'm not talking about Kibuishi's fabulous follow-up to the first volume of the Amulet series, but in a way I am because it feels like forever since the first volume came out (almost two years by my clock) and I found that I was forced to go back and read the first book just to remember who the characters were and how they got there. Down the road there will be readers who will have the entire story laid out for them and can read them straight through, but reading a series as it goes, and with long stretches in between chapters, makes it difficult to keep any momentum (much lest continued interest) going. A middle grade reader may be well into high school – complete with a different set of interests – before the next installment comes out. Is that any way to retain an audience?

In this second installment, Emily discovers that the amulet's power is strong enough not only to possess her but to overtake her. Coming to terms with this power while trying to save her mother, it becomes clear that Emily's role in this parallel world is much larger than she imagined as the keeper of the stone; she is nothing short of a second coming, a savior in a world menaced by the evil Elf King. In the end it is clear that stage is set for an ultimate battle, but how long it will take and far it will go is hard to say.

Parallels between Amulet and Jeff Smith's Bone series are strong. There isn't as much humor, and unless this is a long series the characters don't have the same depth, but it plays to the same audience looking for solidly paced fantasy adventure. The illustrations are rich, almost moody, and its clear that a great deal of care is being put into this graphic novel at all levels. But if this series is planned to go beyond three volumes, then perhaps Scholastic should consider holding up the series a bit until they can roll them out on a faster schedule. Amulet is too good a graphic novel for young readers to get lost in the apathy of growing, fickle readers.
Posted by david elzey at 4:02 AM