The Great and Only Barnum 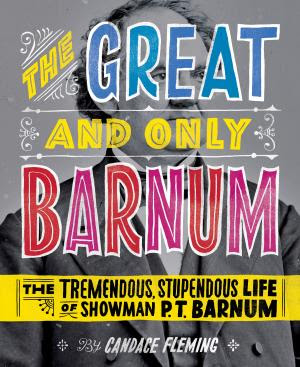 Assuming you've read nothing about his life, what do you know of P.T. Barnum? That he was a huckster and a flim-flam man? That his name was the first name in three-ring circuses for a good portion of the 20th century? That he said "There's a sucker born every minute?

That's about as much as I knew – or thought I knew – going into this biography, coupled with a skepticism that was little more than a glorified snake oil salesman. Nothing like a well-written biography intended for middle grade readers (and up) to clear the air.

First, the quote: Barnum never said it, one of his competitors did, apparently cheesed that Barnum was able to corner the market on drawing a crowd. The circuses came later in his career, built from a combination of his showmanship and the desire to mix the curiosities from his "museum" with a traveling show full of animal acts and clowns. In between there was his American Museum of alleged artifacts from history (many of them fake) and the type of human curiosities generally associated with traveling freak shows.

If Barnum's life seems like the natural extension of Professor Harold Hill's fast-talking salesmanship it's clear Barnum was born for the life he led. As a boy he was successful in drawing a crowd and making money from them. And what's most surprising is how genial he seems, how he never regarded the public as the "suckers" despite the importance of making money from their gullibility. He had a genuine regard for what we would probably call low entertainment and discovered that the general public didn't mind "harmless" hoaxes.

Fleming makes this a breezy read, well-documented with a strong narrative thread, and actually fun. Makes me wish there were more biographies like this when I was a kid.
Posted by david elzey at 4:20 AM

I liked this one, too, and went to hear Candace Fleming speak in Bridgeport CT, Barnum's home base. She said she got interested in him after researching her Lincoln book. Some aspect of Lincoln's life had placed him near Barnum's American Museum in NYC, and Fleming began to wonder if Lincoln had gone into the museum.