The Seems: The Lost Train if Thought 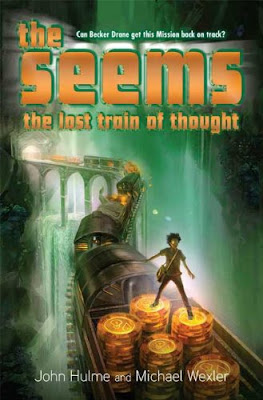 By all accounts I should really like this series. No, I should love it. It's got all the things I've identified as being the perfect book for boys. It has action and adventure, clever wordplay and humor, other-world fantasy with real-world consequences, a tinge of romance, political upheaval, and a teen boy working alongside a world of adults. So why do I feel like its all a big, over-calculated, relentless cheat of a series?

In this, the third book of The Seems saga, we find fourteen year old Fixer Becker Drain still doing what he does best: using his uncanny 7th sense to help locate and repair the problem areas in the world-behind-the-world known as The Seems. Figurative expression in our world are very real in The Seems. There actually is a train carrying several weeks worth of Thought that goes missing in a place known as The Middle of Nowhere. A Brainstorm is the sort of thing that has physical consequences. The Court of Public Opinion is where legal issues get hashed out. There isn't a page that isn't chock-a-block with these living idioms, always in Capital Letters to remind the reader of their actuality.

The missing Thought Train looks to be the work of the resistance group known as The Tide who are looking to shake up a new world order and give the world – both worlds, actually – a fresh start. Due to his meddling in the real world, Becker finds himself on probation within The Seems and finds himself looking for the sort of redemption that generally has fatal consequences. Saving both The Seems and The World in just the Nick of Time is inevitable, and whether Becker ends up in A Better Place (or whether or not there's any difference between A Better Place and The Seems and Heaven) is up to the reader to decide.

The series is full of itself when it comes to this sort of linguistic gymnastics, and perhaps that's what is gnawing at me. Readers need to really invest all their energies into keeping track of this alternate universe while at the same time possessing enough experiences with language and idioms to get their double meanings in an instant while whizzing through the action. Its almost too clever at times, vacillating between elitism and a massive inside joke that's too complicated to explain. Over long stretches of reading I suppose its possible for a reader to become immersed in this world that it all washes over but I never could get lost in the story because the narrative was working Too Damn Hard to remind me of its Cleverness.

Also, and this just occurred to me, the plots are built around the interaction of all these different elements in The Seems that it's easy to miss the deus ex machina element. In fact, the entire notion of The Seems is that it is both the deus and the machina. Everything is designed to go according to The Plan (the Plan being the stand-in for God, and it's all a part of the intelligent design) which created The World and The Seems (heaven and earth) as a co-dependent unit where failure in one creates the end of all. No, I didn't just catch the religious allegories – I caught them from the start – what I just realized, and what might be the itch I couldn't quite scratch, is that these stories are all solved through the mysterious hand of fate. Where there is danger and death, salvation and redemption, a battle won and lost, it's all been so carefully tooled that it could only be plausible in so artificial a world. Ultimately, if "The Plan" is to be believed, everything is predestined and preordained, and every character is a mere puppet to plot.

Character should determine plot, but here plot determines all.

At the end of The Lost Train of Thought there is an open door for the series to go two different directions, maybe three. Without saying outright this is end of a trilogy or a continuing saga the book appears poised to jump wherever demand sends it. There has been a Seems movie that's been listed as "in development" since 2007, and IMDB shows a 2010 release date for a movie with no cast or director details. While there is plenty of action and visuals to make these movies work it is difficult to know how much of the humor will be lost when the Words said by actors don't stand out the way they do on the page.

I would think, all my misgivings aside, that there are readers out there who would enjoy this, but in the end I suspect there is a very narrow band of audience for this series. It has the earmarks of science fiction but is really pure fantasy, and unless the reader is an undiscerning fan of both – and possesses the ability to catch the verbal humor – The Seems is likely to either disappoint or frustrate.
Posted by david elzey at 4:01 AM