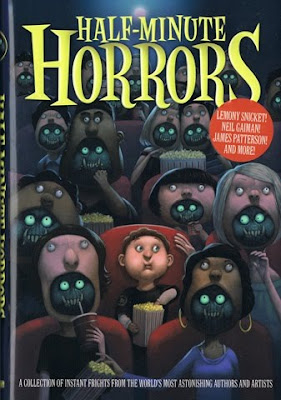 Billed as a "collection of instant frights from the world's most astonishing authors and artists," Half-Minute Horrors lives up to its title by presenting super-short sudden fiction to middle grade readers who like a little creepiness. Just a little, not too much. A set-up, some sort of mystery, and an unsettling cliffhanger of an ending are the norm here, almost all of them short enough to read in the promised half a minute.

And when I say a little creepiness that doesn't mean they can't be somewhat disturbing. There are implications of cannibalism, creatures laying in wait to swallow you whole, disembodied hands that come calling while you sleep... but all stopped right at the moment of impact so that the reader can quickly turn the page if necessary. Because the engagement is so short there isn't enough time to plant too strong a mental picture to disturb. Yeah, if you think about some of these stories long enough they can really delve into truly terrifying territory, but the reader interested in horror is going to feel cheated if the author or the story pulls its punch too much or too quickly. Many of these stories plant their final, fatal twist in the last line for maximum impact so that even the seemingly odd story suddenly can turn on a dime.

There are also some illustrated stories - I hesitate to call them comics, but some do take that format - which perform the graphic equivilent of their narrative counterparts. Perhaps only "Worms" by Lane Smith, a visually retelling of the gory old rhyme "The worms go in, the worms go out..." goes the furthest with its graphic depiction of life pre- and post-humus. Still, all good creepy fun.

One of the things this book reminded me of was a series of books I had as a boy called "One Minute Mysteries" which would set the reader up with a drawing room situation and some details that would allow a reader to guess what had happened. Only I could never guess correctly and instead of enjoying the mystery I found the books frustrating because they made me feel stupid. I suppose the idea of a minute mystery was meant for boys like me who (at the time) were struggling with reading, but that book sent me the wrong direction. Perhaps the lack of character and emotion was the problem, but I never really got into the mystery genre as a result.

There's no similar problem here with Half-Minute Horrors because the stories clearly spell out the (pending) doom, leaving the reader to invest as much emotion as their own fears permit. The various authors are all top-notch – M.T. Anderson, Adam Rex, Sarah Weeks, Holly Black, Jack Gantos, Jon Scieszka, Avi, and Lauren Myracle to name but a scant few –and include some generally regarded as adult writers, like Margaret Atwood and Jonathan Lethem, delivering on a wide variety of themes.

I realize this comes too late to incorporate into Halloween lesson plans, but I would hope that the audience for this kind of thing sees this as more of an evergreen title. I think for the reluctant reader the ability to whiz through dozens of stories at one sitting will make the book feel much shorter than its 130 pages, and for other readers the shortness of these stories can serve as a sort of palate cleanser between much larger books, a sampler platter of ghoulish delights.

Yuk, did I just write that last semi-blurb-worthy sentence?

Anyway, lots of gory fun.
Posted by david elzey at 5:03 AM