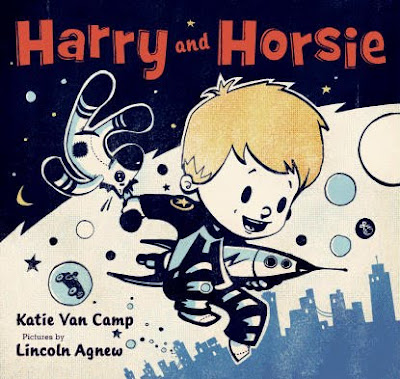 Here we have the promise of some truly bold retro graphics marred by a weak text with the faint whiff of celebrity, second-hand by-association celebrity at that.

Late at night, while she should be sleeping, Harry sneaks out of bed and grabs his Bubble Blooper down, a 50s space gun that shoots large bloopy bubbles. The bubble are large an sturdy enough to pick up toys from Harry's room and send them airborne. But when a bubble takes Harry's stuffed Horsie it's superhero Harry on his rocket into deep space for a rescue. 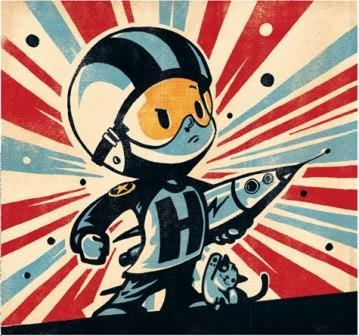 The star here isn't Harry but the art, that look like a cross between block prints four-color offset comics. Seriously, if I could, there are a few pages in here I'd love to own prints of and have framed. They certainly don't suffer from a lack of 264 digital color process, with bold blue-black outlines and deft use of spot color.

Van Camp holds the distinction of being the former nanny of a boy named Harry who really does have a Horsie and happens to be the son of Late Night impresario David Letterman. Yeah, that's the second-hand celebrity connection. The story itself is fairly light – typical hero-to-the-rescue night-journey stuff – with no real peril, no real growth involved. It isn't necessarily a bad story, but the art is much stronger that the text and that 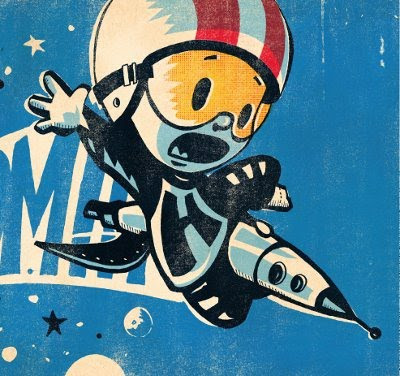 only highlights the disparity.
Posted by david elzey at 5:06 AM

Isn't that art cool? And isn't that story lame? I had to read it two or three times, and never did figure out how it happened. I can only guess Letterman had something to do with it.

Can't wait to see more from the artist.