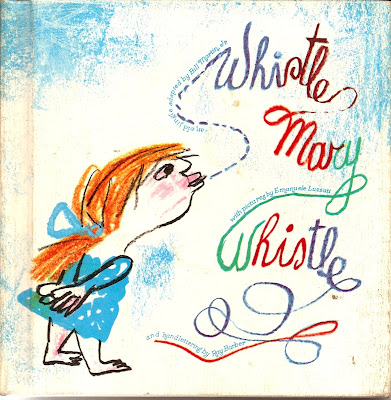 an old jingle adapted by
Bill Martin, Jr.
with pictures by
Emanuele Luzzati
and handlettering by
Ray Barber
Holt Rinehart, and Winston 1970

Yes, as a matter of fact, there are some books I do read for the pictures.

One of the lasting after effects of wanting to grow up an be an animator is that I still keep an eye open for blogs and news about cartoons and animation, especially from the pre-digital era. It's also no secret that I hold a fondness for mid-century modern illustration, and anything else that feels like my childhood. So when these things all come together in one place, or in this case a book, my curiosity is piqued.

Emanuele Luzzati was an illustrator, animator and graphic artist whose work has a very familiar look that carried a lose, childlike feel to it. When coupled with Bill Martin Jr. in a small picture book the hook is irresistible. But what we land when the hook is reeled in is a bit odd to these adult eyes. 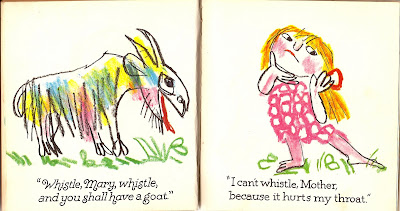 "Whistle, Mary, whistle, / And you shall have a..." is the text on the verso page, with the last word being an object promised to Mary id she will whistle. On the recto Mary offers up her reason why she cannot whistle, surly a made-up excuse, which always rhymes with the first part of the verse. It's a fairly typical call-and-response sort of text whose repetition takes on the sing-song qualities of a playground rhyme or an old folk song.

But the punchline is that the thing that makes Mary whistle.

"Whistle, Mary, whistle,
and you shall have a man."

Visually, Luzzati's work had a playful joy to it that I would still like to see in books today; it's loose, playful, and childlike in a way that is inviting to young children. I find many books today with computer generated images have fine texts but are otherwise cold and sterile. The inclusion of hand-drawn letters (and a title page credit) is something I think would be welcome over the font choices made today. Even when alternative fonts are used today they too often feel like the office temp making posters for the employee kitchen using Microsoft Word. Cold images, cold fonts... reading should be a warm and inviting experience. If this makes me sound like a crusty old man, so be it.
Posted by david elzey at 5:18 AM

Hi!
Thank you for this!!! I sooo much agree with you regarding warmness and style. Have you ever visited the Luzzati Museum in Genoa? That is an experience!
Thanks again,
Cris

haven't made it to italy... yet! another place to add to my ever growing list, thanks!