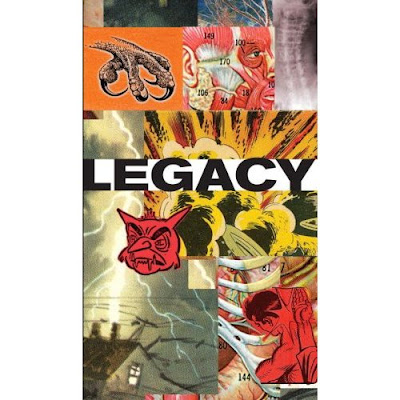 At the risk of repeating myself, and stating the obvious, I cannot fathom for the life of my why anyone would seek out a superhero novel. Movies have made the idea of superhero stories vogue, and comics have long perfected and delivered the superhero story in an economical and vibrant format, but I am still unconvinced there is any sort of hue and cry for superhero fiction.

Lucus is a high school drop out in a dead-end desert town working the auto shop. His mom works the local diner. They live in a trailer park. After work he drinks himself drunk and sleeps it off.

The day after he miraculously and instantaneously heals from a knife wound inflicted by a local thug Lucas is visited by a mysterious man claiming to be his father. More, this mystery man who needs a cane to walk turns out to be billionaire Clayton Hartwell, and the old man can kick his ass in a fight. Turns out Lucas is his long-lost deadbeat father and...

Wait. I have to pull this joke: "Lucas, I'm your father! Search your feelings and you'll know this to be true!" Love the George Lucas/Luke/Star Wars reference. Really makes me want to take things seriously. Okay, where were we.

Oh yeah, so dad drops in to say (a) he's dying, (b) that he's a famous superhero named The Raptor and (c) that it's Lucas's legacy to take over. Lucas refuses and wants to confront his mom, but the minute she admits that it's true the trailer park is under attack and, after a fiery inferno takes the place down but leaves Lucas unscathed, he finally accepts who he is and is drugged into a deep sleep.

So we get the billionaire crime fighter with a secret identity, a mansion full of high tech gadgets, a flying suit... he's like Ironman and Batman rolled into one. But not just any Batman, but the Dark Knight who must be convinced that Seraph City (seraph = angel, so I'm guessing Los Angeles) is worth saving. Then again, Hartwell is a little like Ironman's Tony Stark who has decided to use his money and access to technology for good, so he's a conflicted Raptor.

Anyway, once Lucas accepts his fate, or legacy, or whatever, dad puts him through rigorous training whith I have to say is a bit sadistic. Seriously sadistic in some cases. Actually, every life-or-death struggle Anakin puts Luke.. er, I mean that Hartwell puts Lucas through is a pass-fail exam where success is measured by not getting killed. In the end Lucas has to decide whether the old man has gone bats, and whether he's going to take over the family businesses, and be the upholder of vigilante justice in the name of a city he never really loved the way his father allegedly did.

Here's where comic books get superhero stories right and novels, especially novels for teens and middle graders, get things wrong. In comics there is usually some crime and action scenes establishing the superhero and maybe a brush of backstory along the way toward catching the bad guys. Once the comic is established, and the readership solidified, they'll take a breather and give the superhero origins story. By then reader interest is piqued and they want to know who this person is and how they got there. But in novels you don't get several (dozen) stories to build a readership before giving the backstory, and as a result the superhero novel always has to begin with the origin, which slows things down, is tedious, and basically isn't why the reader has picked up the book in the first place.

The reader wants action, and battles, and an evil that must be fought, and they don't want a bunch of inner dialog and pondering to get in the way. With Legacy we even get something worse: an entire novel-length origin/rebirth story. This might make a good story ten or so issues in on a comic line, but in novel form it's just deadly. I kept thinking "Okay, once we get past this father-son ordeal we can get into the nature of crime fighting, or the problems of having to sort out the subtleties of good and evil when you're only 18 years old, but no. Just dad torturing son who he keeps threatening with the old "not good enough" guilt trip line.

What surprises overall is that Sniegoski is a comic book writer as well as an author, and I would have expected him to know better than to recycle a bunch of tired tropes and types that are easily identifiable. If the argument that the book is intended for a younger, less-familiar audience then I find that insulting. Sniegoski is also the creator of the Billy Hooton, Owlboy series aimed at a middle grade audience, another title that suffers from this misguided notion that kids go into bookstores asking for books about superheroes they've never heard of. Newsflash from a former bookseller: they don't! Not only that, the boys who do mention superheroes as an interest are looking for comics and give booksellers the stink-eye if you pull one of these titles on them.

Given the lead time on books I'm going to be optimistic and hope this is just one of the last entries in the superhero bandwagon that publishers jumped on a few years back. Yeah, that's it. Once the economy tanked and they looked at sales they realized that there's just no way Barnes & Noble is going to install a Superhero section in their stores and have stopped accepting new superhero manuscripts. Probably one or two more like this and the "genre" will be officially dead.