Punch and the Magic Fish (with video bonus) 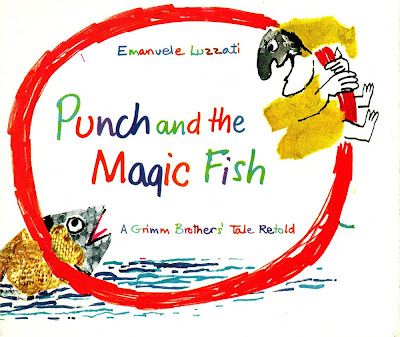 Luzzati's retelling of the Grimm's "The Fisherman and His Wife" get overlaid with the Punch and Judy comedy of the hapless hunchback and his shrew of a wife. Not as opulent as some of Luzatti's other illustrations, the story melds the two stories fairly well until the end when it veers a little and the magic fish from the original ends up in the frying pan.

I've done coverage on the original Grimm story long ago when I was doing that sort of thing more often with my Grimmoire series. Basically, Punch the fisherman finds a fish who, in exchange for his freedom, grants the fisherman a wish. His wife Judy sends him back repeatedly to upgrade the wishes even though Punch is perfectly happy with his life at every stage of the story. Finally the wife goes one wish too far and the fish returns them back to their poor life with a family of hungry kids.

Luzatti is usually very bold with his colors, but here everything is set against open fields of white and it doesn't work for me the way his other books do. Still, the mix of torn paper collage and sketchy marker give it that whimsy that I like about his work.

As an added bonus, I was able to find a video Luzzati made around the same time that features Punch and the music of Rossini. It isn't "The Fisherman and his Wife" but it shows another side of this illustrator's work. The darker elements of a traditional Punch and Judy story are here - the beatings, Punch's journey to hell - but I think this could still work for kids today. Some kids. Anyway, enjoy.

Totally transfixed by the Pulcinella video, David. Thanks for posting it!

Happy to do so, Julie. Makes me long for the old International Tournée of Animation that I used to see on college campuses when I was a teen.