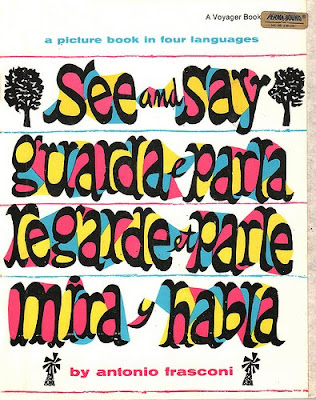 Until just this moment when I looked up the publication date I would have sworn this book was 15 to 20 years younger than it is. This multi-lingual abecedarian groups words and images at random throughout with each object named in English, Spanish, French and Italian, including a pronunciation guide as well. The words and images are common items independent readers would know, allowing for this book to be a beginner's guide to learning common words in four languages. On the last page there is a list of common phrases, a sort of beginner's phrase book for world travelers of the picture book set.

Another book checked out more for the pictures than the content, Frasconi's woodcuts are bold and simple graphics that use layering and the texture of the wood grain to good effect. The use of four colors (and black) is done in a very modern way, and the lower case font I think is what initially threw me in terms of guessing the book's year. Despite its age, the book is still serviceable (though I believe it is no longer in print). 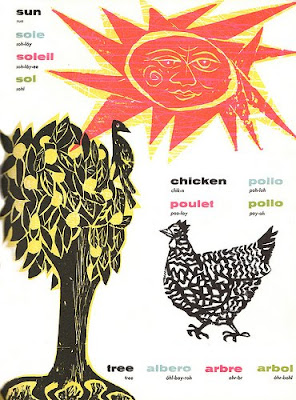 Out of curiosity, I was curious to see when Mattel first produced the See n' Say, a toy where children would line up a pointer to an illustration of an object on a clock-like face, pull a string, and hear a stirring voice say something like "The cow goes.. moooooooo!" These simple analog learning toys were quite the rage in the 60s (and still in production under the Fisher-Price name) work well enough for the pre-reading set, but are limited to a dozen objects and quickly are abandoned. The book See and Say, which predates the toy by a decade, contains at least 60 words and their variants in three other languages.

My point? That even today, there is more value to be had in a book than an expensive toy, that simplicity doesn't mean limitation. Once a child has learned to match an image with a name and a sound, what more is there? What prompts the child to want to explore more? With See and Say there is the opportunity to not only learn the name of things, but the similarities and differences in names across cultures. There is an open door to sound out new words, and the possibility to excite the love of languages in young minds when they are most elastic and available to learn second, third, and fourth languages.

In the 1950s, when See and Say was published, the post-War world embraced travel abroad and the idea of learning more than one language was a bit of cultural capital that was also a high point of education. Today, with English having established itself as the international language of commerce, it is no longer necessary to learn another language in order to travel and breeds a sort of arrogance that other nations and cultures resent. It is not unusual to find Europeans who know three or four languages, including English, but in the US a polyglot is seen either as a learned scholar or a show-off. I hear kids marvel at how well foreign students speak English and know several languages while they struggle to master their own native tongue.

So while I was drawn to this book for its art I realize that things have changed in the past half century in picture books, because I don't know how popular a book like this would be today. We live in a country where English-only ballot initiatives underscore just how intolerant we've become, where instead of learning other languages we now suspect those who speak foreign tongues might be terrorists out to get us. We might do well to consider the generations coming up and looking at the books we give them as a way of fostering tolerance and understanding.

Or we can let publishing get taken over by electronic devices and continue to insist that our cultural arrogance is everyone else's problem.

Wow, how'd I get way up here on this soapbox?
Posted by david elzey at 5:39 AM