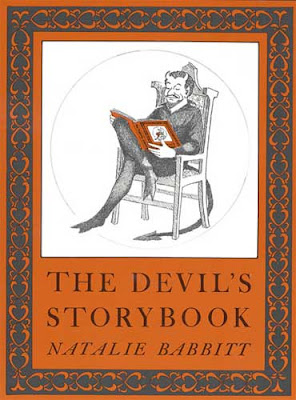 Ten little short story gems concerning the Devil himself and his inability to corrupt good souls or fully control bad ones.

I stumbled onto this (as with many older titles these days) in an sales alcove at my local library. Discarded, withdrawn, and donated books are in constant rotation, and with prices between twenty-five cents and a dollar it's impossible to resist. I'm always so surprised when I stumble on a title I haven't come across before, or an author I recognize but not the book in question. Just another one of those reminders about how much is out there to discover, how there will always be hidden gems to be mined with careful eyes.

These stories fit a type of tale that I know there is a name for, but can't quite recall. In each, Old Scratch has decided to adopt a disguise to trick the unsuspecting into performing an act of evil, or has co-opted the innate evil of certain individuals for his own purposes. His ruses never work, and his plans always fail, which is as it should be.

But what a delight to see such a classic form of evil as the main character in a collection. On the one hand it seems novel to take a character who is usually an antagonist and make them the butt of every joke, but then the devil always gets his due just as if he had once again been outwitted in someone else's story.

Rarely do I find story collections so even that it's hard to pick a favorite, but the one that stays most with me is the last story "The Power of Speech." In it, the Devil has a fondness for goats, and one goat in particular, but the goat is wearing a bell and this is somehow like garlic to a vampire (who knew?). The goat's owner is no dummy and will not remove the bell, so the Devil grant the goat the power to speak. What a mistake that is! A more whiny, grumpy, cantankerous goat you'd never heard! Realizing what a pain this new talking goat is she decides to remove the bell and send him on to the Devil. Once in Hell, the goats incessant chatter drives the Devil crazy, and while he is able to grant the power of speech he cannot remove it. Finally he turns the live goat into a stuffed one and returns him to his previous owner.

Babbitt writes with the breezy charm and economy that mirrors classic folk tales (and who know, perhaps these are folk tales I'm unaware of) and there's something secretly delicious in wondering if Satan's really going to finally have something go his way. They read like a cross between something Carl Sandburg might have cooked up if he were reinterpreting some Grimm tales. The characters are vivid, well drawn in such little space, and the stories feel much more full then their page counts would have you believe.

When I finished this book I thought my 11 year old would like the stories. "Oh, yeah, I already read those. They're good. I think there's a second book of Devil stories as well." Turns out she's right, there is. I had the wind taken from my sails that I couldn't spring a new-old title on her, but at least I was correct in thinking she'd enjoy it.
Posted by david elzey at 5:17 AM

I haven't seen this one. Some Babbit wears well (Tuck Everlasting), some doesn't (The Search for Delicious). I'll have to see if this one is still in print.

i do believe both this and the sequel are still in print. or at least readily available online at finer book emporiums.