When It Rains.. It Rains 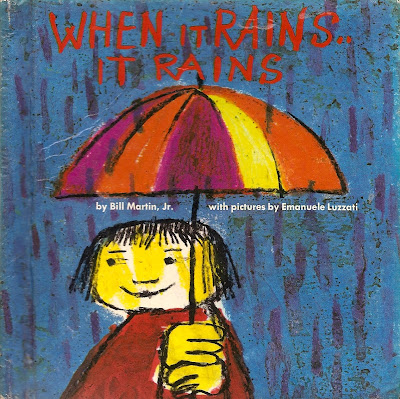 by Bill Martin, Jr.
with pictures by Emanuele Luzzati
Holt, Rinehart and Winston 1970

Much like last week's Martin/Luzzati collaboration, When It Rains.. It Rains is another small book that deals with repetition and familiarity to hold a young reader's attention. It didn't occur to me before, but these small books with their childlike illustrations and simple texts were precursors to the board books of today.

Here the pattern is established in the title. Each spread deals with a different type of meteorological event like rain, snow, and fog before moving into the emotional territory of age and temper. There is more of an attempt to bring in images of non-white children which speaks to its age, though their representation tends toward the Small World variety of stereotypes: a white-turbaned Indian boy beneath a palm tree in the heat, a Mexican boy in a sombrero and blanket poncho. Nothing too egregeous for the modern age, but as with Whistle, Mary Whistle, probably enough to keep it from ever being reprinted. 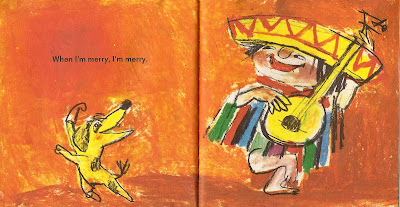 But, again, my draw to these books was the illustration. The pictures contain the same innocent qualities of another Martin collaborator, Eric Carle, with a warm use of vibrant color. Luzzati, along with Nicolas Sidjakov, The Provensens, Mary Blair, and M. Sasek all have that mid-century modern look illustrators had that I'm just a sucker for. Inky outlines and loose crayon against solid blocks of color. There are a few modern practitioners (who might be surprised to be considered part of this group) like David Ezra Stein and... well, now I'm drawing a blank. I think Jeremy Tankard is doing some great work in digital that is along the same lines in terms of boldness of color and naivete of spirit. And there is an artist I've been following since she was a student in animation school (on her blog, I'm no stalker!) named Lorelay Bove who has landed a job illustrating Disney's newest Golden Books and whose work reminds me so much of Mary Blair.

What was I saying? Oh yeah.

Taking a couple more looks at this it slides in nicely alongside Bill Martin's other books. No more and no less sophisticated than Brown Bear, Brown Bear, What Do You See? and its ilk.
Posted by david elzey at 5:42 AM