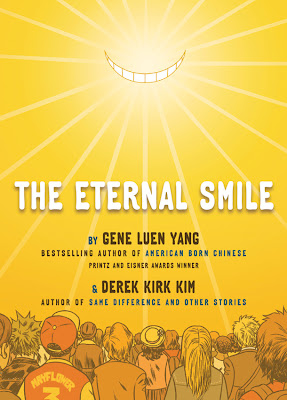 This graphic omnibus collects three shorter illustrated stories that are bound by the common thread of illusions that people tell themselves to survive.

The first story, "Duncan's Kingdom," at first seems to be a fairy tale fantasy, a dark Grimm-like tale where two men are to battle the Frog King to win the princess. The twist comes when Duncan comes to realize that the sage who has been guiding him is also protecting him from a secret that reveals his true self. The choice forces Duncan to decide whether to remain trapped in his fantasy or to face the cold, hard reality he has been avoiding.

"Gran'pa Greenback and the Eternal Smile" begins as a parody of the old Disney Scrooge McDuck comics where greed is good and celebrated until a mysterious smile appears in the sky. Greenback decides to take advantage of the apparition and establish a cynical religion designed to fleece believers until a competitor sets up camp offering something a little closer to faith. The twist here is that the world of Gran'pa Greenback is actually a television program that built a Disney-like empire by employing animals with digital implants designed to make them perform. Another opportunity for choice, this time for the frog forced to perform: can he escape his fate and return to a normal life in the pond?

In "Urgent Request" we find Janet, a lonely computer programmer who is so desperate for contact that she responds to an email request from an unknown Nigerian prince to send him funds to help him preserve the fortune he is about to lose - the Nigerian scam that frequents many an email inbox. Mousy shy but otherwise intelligent, Janet gets sucked in deeper and deeper until her bank account is drained. When she insists on a face-to-face meeting with the "prince," and then hunts him down, she finds a college student using the scam to fund a questionable online venture he's dreamed up. Janet's choice is what she will do from here out, and the impression is that she'll start standing up for herself.

The theme that everyone has a choice to make between fantasy worlds and facing reality might be novel for less experienced readers and could provide some "teachable moments" with compare-and-contrast discussions. As I have read in other reviews, I found none of the plot twists surprising, nor where their outcomes difficult to guess. Taken together this collection would make for a good starting point for middle grade and YA readers who might suspect that all comics are superhero and that graphic novels have nothing to offer them. Nowhere near as engaging as Yang's American Born Chinese or Kim's Good As Lily, but still entertaining.
Posted by david elzey at 5:50 AM