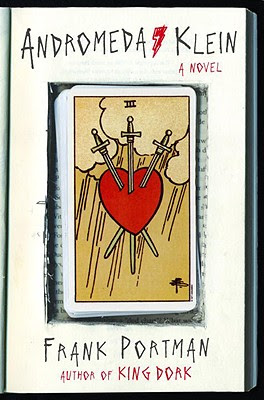 Tedious. That's the first word that comes to mine when thinking about the title character to Frank Portman's follow-up to King Dork. And self-absorbed and self-important. Unfunny and uncharming. Manic, but not in a pixie dream girl sort of way. Did I say tedious?

At the core of this book is a teen girl who views the world through a prism of tarot and dark magic. When she loses her best friend and partner in magic, Daisy, and her boyfriend in the same week she is convinced the universe is sending her messages. More specifically, Daisy is sending her messages from the great beyond via her cell phone. It's a puzzle – what is Daisy trying to tell her? – that only the most egocentric of people would assign magical properties to. Steeped as deeply as she is in the teas of the occult, there isn't a moment that doesn't in some way echo back with acridity to Waite or Crowley or her tarot misreadings. There are numerical coincidences, and concordances with books in the library in which Andromeda works, but in the end the Great Mystery from the great beyond is little more than a prank that may have once had altruistic origins but has sense gone off the rails.

Portman's portrayal of Andromeda reads like an avatar for his own dissemination of arcane knowledge more than an enriched character portrait. Andromeda suffers from osteogenesis imperfecta, a disease that causes her bones including those in her ears to be fragile, allowing her to mishear conversations right and left. This coupled with her constant analysis and regurgitation of the arcane reduces the storytelling to a lurching train of words coupled, at times, to mind-numbing lengths. Portman's third-person narrator slips conveniently (or sloppily, depending on your read) between a distant observer and a voice so close it might just as well be Andromeda's subconscious. There are writers out there who could make this work, and to great effect, showing the reader how messed up Andromeda is in a way that would make us sympathetic. Portman isn't that skilled and the result is a bit of a slog to read.

With a story so deeply invested in various rituals and magik you would hope that the journey through its 400-plus pages would reveal something quiet and reaffirming about the confluences of life's various streams. Instead we find Andromeda the butt of a joke so base that police action is inevitable, but not shown, rendering the intricacies of following the girl's journey virtually worthless. The biggest cop-out comes in not following through on the aftermath, which would have been far more interesting than a good chunk of this book's flabby middle.

Nope, sorry. It's been a while since I had a book make me regret the time I spent with it.
Posted by david elzey at 5:26 AM

You know, I was probably in a very small minority in that I wasn't fond of King Dork. I'll only be reading reviews of this book. I'll definitely be looking forward to seeing how the others I find compare with this one.

i don't even remember reading king dork. i mean, i read it as a galley and never blogged the review and now, for the life of me, can't remember it. take from that what you well. i do remember at the time folks falling all over themselves in reviews and thinking "huh. maybe i should look at it again" but never did.

as with music, sometimes i think the best way for writers to avoid the "sophomore slump" is to sign them to two-book deals and have their second book published first.

I loved both King Dork and Andromeda Klein. Like AK, I have an obsessive personality and a brain that painfully rehashes everything repeatedly.... I personally did identify and sympathize with her... I don't have an obsession with magic but I liked hers.... And I think the point of the not revealing something "quiet and reaffirming" was to show that even with "magic" life is still big crazy chaotic and hard to understand. I thought the ending was realistic... I thought her crazy mind and her weak relationships with others was realistic as well.... and the andromeda wordplay was the best part... and the real references to magic texts just enriched the experience and added an authentic texture to the book.