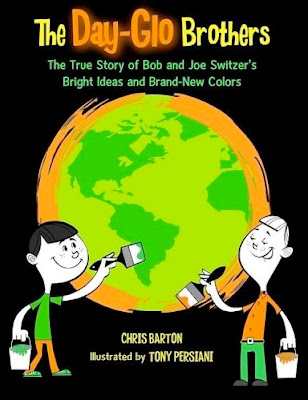 The picture book biography of the two brothers who developed, by accident mostly, the process by which hippies were able to enjoy black light posters and the military was able to signal aircraft from great distances. Okay, that's a bit flip, but while the subject is unique what is more fascinating is that, as far as I can tell, this is the first biography on the Switzer brothers outside of a self-published book written by a Swtizer family friend. I am hard-pressed to think of one other biography written specifically for a picture book audience that wasn't based on secondary source material; Barton's book reflects his own primary research.

Not realizing that at the start I found myself feeling like the narrative was missing some details about the brother's early lives. But, of course, if the only way to tell the story is by interviewing the Swtizer's living relatives and colleagues then of course background is going to be limited. We know how they came to discover and then develop their daylight fluorescent paints but was it really just as simple as picking up some books at the library and playing around in the basement? Wasn't anyone else working on something similar somewhere else in the world? Had the military never considered developing something similar prior to the Day-Glo brothers? My curiosity is piqued with Barton's book, but unlike other biographies I have nowhere else to go for such answers without doing the research, and possibly writing my own book.

Don't get me wrong, this is a great book on a fascinating subject that I think would have a lot of appeal, especially for boys. And I know the limitations of a picture book might be part of the problem here, but I'm left wanting more. In a good way.
Posted by david elzey at 5:22 AM