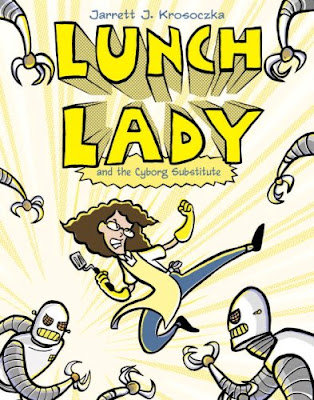 ...and the Cyborg Substitute
...and the League of Librarians
written and illustrated by Jarret J. Krosoczka
Alfred A. Knopf 2009

There's evil afoot, and Lunch Lady is there with her trusty hair-netted sidekick Betty to thwart it. Whether its a league of librarians who plan to intercept all the new video game consoles coming in fresh off he boat, or the mild-mannered teacher who created a robot army to replace the other teachers so he can become Teacher of the Year, Lunch Lady and her never-ending arsenal of modified food service devices will be there to save the day.

These graphic novels aimed at the emerging reader has just enough story to keep them moving along and plenty of action to retain the attention of the fussiest readers, but little else. They have a look and feel reminiscent of the the Babymouse series, though they lack that series more rounded characters. The trio of kids - the Breakfast Bunch - are convenient shells for explaining story elements and become useful only when they fall into danger. Lunch Lady (and Betty) should be the focus and we should know more about what makes them tick.

Similarly, this series also makes a play for the Captain Underpants crowd with the wackiness of superheros but are neither as clever in their humor or as gross as they could be. We are talking about cafeteria food here, a prime area for exploration, and it feels little like an opportunity lost that crime if fought only with the utensils. Also, superheroes have backstories that explain and infuse character. Captain Underpants himself is funny because of how he becomes who he is, but with Lunch Lady the reader is supposed to accept her antics simply by virtue of lunch ladies being somewhat off. 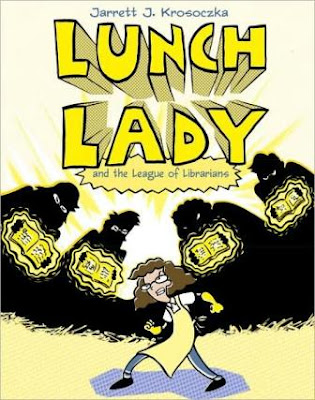 I appreciate the idea of producing more long-form comics for this age group but I feel that with kids a certain standard has to be met. I'm not suggesting that the stories can't be fun and frivolous, but that they be delivered with the same expectations that would fall to a work of fiction aimed at the same level. What makes Captain Underpants work with readers isn't that it has underpants in the title, it's that the characters are distinctly drawn, the text is clever and funny, and the story would be almost as funny without illustrations. There's a whole load of possibility in the concept of a superhero Lunch Lady but it's all lost on just-in-time gadgets and one-dimensional characters.

I found that the moment I closed the book I had forgotten most of its story. The same thing happened on rereading them. There is so little to latch onto that they are as immediately forgotten as the empty calories of a celery stalk.

To steal from Douglas Adams: relatively harmless.
Posted by david elzey at 10:42 AM