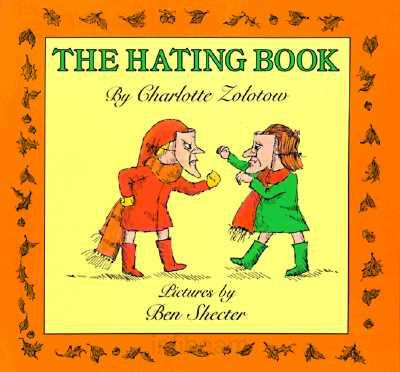 Another book that has the familiarity of being from my childhood, though I'm not really certain I actually did read this before. It feels familiar, which is to say that it taps the same areas of nostalgia that other books from the late 60s and early 70s leave me feeling.

The book opens with this line, and clearly this hate will be examined and ultimately resolved. The girl who utters this statement feels she has been and is repeatedly snubbed be hr best friend and cites a number of examples of proof. Her mother suggests early on that she ask her best friend what the problem is, but the girl simply comes up with a bunch of probable reasons that reinforce her negative thinking. In the end she finally does ask and her friend mirrors her feelings, that their mutual hate was borne of mutual misunderstanding.

The feelings are natural and well-centered in a child's mindset, and the resolution is fine, I only wish that the solution hadn't been fed to the girl by her mother. That the mother makes the suggestion at the beginning is fine, but she repeats the suggestion twice more (the rule of threes) and so finally she does it. So we go from hate-hate-hate to sudden recognition of misunderstanding with little reason or understanding in the transition. And while children do suddenly change and shift allegiances and friendships there is little sense of a lesson learned in the process. Perhaps this book can provide an avenue for that reflection.

The book is very reminiscent of the the Janice Udry and Maurice Sendak book Let's be Enemies which I think might be the better of the two in dealing with the idea of children processing negative emotions. They both come from the same decade, the golden age of the 1960s, and make for a nice matched set of boys and girls dealing with gender-based relationships.
Posted by david elzey at 5:26 AM