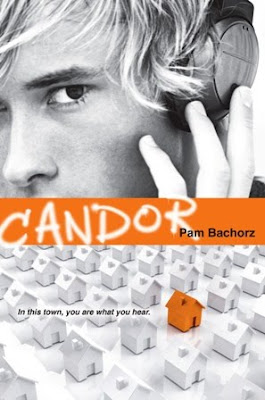 How do you deal with unruly teens? Send them to live in the mind-controlled community of Candor, Florida.

Oscar's father built Candor in the wake of losing his oldest son. The town is a model community, perfect picket fences and everyone striving for greatness. To achieve this effect Oscar's father built subliminal mind control into the town's architecture, through music constantly playing and reinforcing only the messages he wants.

But Oscar's mother resented her husband's methods and left. Oscar was strong-willed and able to resist the messages long enough to teach himself how to counter-program himself and other rich kids for a price. He's helps a dozen or so kids escape and set himself up a little secret offshore bank account. He could leave any time he wants, but he'd rather help others get out while they can since he can keep up the charade without giving into the messages that totally remove his personality and turn him into a robot like the other teens.

Problems arrive in the guise of a girl, Nia, who fascinates Oscar. She's a hard case, but Oscar eventually convinces her that he's not the model citizen everyone believes and he's slowly preparing her to escape. Because he's in love with her. But Nia's parents don't feel her personality is conforming fast enough and they send her to a special room Oscar's dad has set up where she spends four days having her brain wiped clean of "bad" behavior and replaced by his extreme programming. Once out, Nia is as brainwashed as all the other kids and Oscar decides to risk everything to save her.

Author Bachorz lived in the planned community of Celebration, the "perfect" town created by the Walt Disney Company. If you've seen the Jim Carey movie The Truman Show you can picture this sort of community perfectly, because they filmed the movie there. Superimpose another movie, The Stepford Wives, on top of that and you've pretty much got Candor. Which is not to say it's a bad idea - it totally feeds into the notion teens have about their parents wanting them to be perfect little robots - but it isn't without problems.

Mostly what bothers me is that is the entire community is being fed messages, that would include adults and they wouldn't be able to argue about the treatment of their children (as they do here) because they wouldn't understand it. Oscar's dad, the staff at the hospital, all the adults are somehow immune to this subliminal messaging, and that selectivity just isn't possible in a town where the messages are 24/7. Oscar proves that deprogramming is possible, and the kids who are taken off-message do have to maintain a veneer of still being model Candor citizens for fear of being found out, but there's no sense that the adults are going through this same sort of counter-programming. Oscar's dad, who must maintain control over every aspect of the town's carefully planned existence, could not remain as analytical as he is if he weren't somehow constantly unaffected.

That this detail is never explained (either that or I blinked and I missed it) crushes the novel for me. World building in sci-fi and fantasy, including real world dystopias like Candor, live and die by their ability to not let the world outside the book take over. At every turn I was constantly finding myself pushed out of the narrative and wondering how this was possible, how these people were affected while others were not, and ultimately how a town could be built on mind control by someone without a degree in psychology and be kept secret from the outside world. This last part is most puzzling, as kids who graduate and leave Candor must do so with a pre-recorded set of "messages" to keep them in line else they will suffer from psychosis. One family is reported to have gone on vacation, forgotten their messages, and killed themselves and each other in a hotel as the programming "wore off." It all just doesn't hold up well under close scrutiny.

I ran this book by my resident 13 year old dystopia expert, and while she enjoyed it she had nothing to say about it afterward. This is unusual because most of the time she wants to talk about the Big Ideas that speculative fiction generates. When I posed the question of the adults not being influenced by the messages she had a couple of theories, but nothing that came from the book itself.