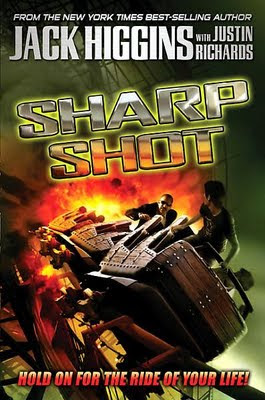 Bond movies were the first place I encountered the idea of a story starting with an action sequence that was unrelated (or tangentially at best) to the rest of the story. The idea was to get the blood pumping with Bond in some perilous chase, have him come out victorious, slide into the title sequence, then into the story at hand.

It's an effective "hook" but what if you took it further. What if you opened with an action prologue set in 1990's Iraq, with British special forces getting ready to blow up a secret nuclear facility. Then jump ahead to today where one of the people from that mission shows up on the doorstep of his former team leader begging to be saved from unknown enemies, which sets off a chase that doesn't let up until the end... with a double assassination threat against two heads of state.

This is set-up for Sharp Shot, the third book in the Jack Higgins series featuring the teenage Chance twins, chips-off-the-block of their Bond-like father, John Chance.

As established in the previous books, Rich and Jade are more than up to the task of international intrigue and quick-witted action. If the plot gets stretched too the edges of credulity the pages burn at a frantic rate

Normally, if you asked me, I'd say I don't generally like these political espionage thrillers. At least not as books – I love this sort of thing as a movie. But I've read all three of the books in this series and I have to say, these things read like relentless action movies. No one is going to confuse these books with literature, but that's not the point; where's the fun of reading if every once in a while you can't just go with the fun?

(this review is also cross-posted over at Guys Lit Wire)