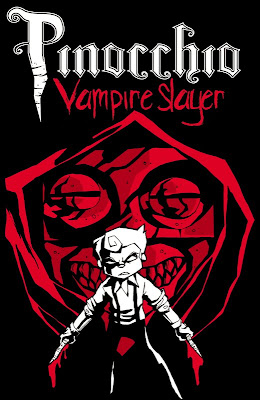 It's a clever idea for a graphic novel, marred slightly by clunkiness and serialization, but still fun.

Picking up where Collodi's original story left off, Pinocchio is older, only slightly wiser, and still a puppet. No, he wasn't turned into a real boy. And his town is suddenly being culled by dark creatures of the night who seem to be doing the bidding of the Master. Pinocchio has lost his "father" Geppetto to these creatures and now, with the aid of his carpenter friend Cherry and the Blue Fairy, stalks and kills the vampires in town with the aid of stakes he conveniently caries with him in the guise of a nose. While Pinocchio tries to warn the townsfolk the appearance of a pair of familiar-looking businessmen do their best to prove puppet-boy a lair.

Of course, if he were lying his nose would grow, but the townsfolk conveniently overlook this. He is, after all, only a talking puppet. Why would they listen to him anyway?

There's always been something almost Transyvanian about the story of Pinocchio to begin with, and the current vogue of vampires makes this an easy match-up. The storytelling in Pinocchio, Vampire Slayer is a little uneven – secondary characters and antagonists need to have emotional story arcs, I've recently figured out – and the chunky illustration style Higgins uses gets lost in the heavy zipatone, but I'm still left wanting more. For me, this is a good and a bad thing; good that I'm interested in following the story, bad because I hate waiting for serialized books and will generally lose interest by the time the next installment arrives.

At least, I'm assuming there's more to the story here. If not, well, then there's a bigger problem here.
Posted by david elzey at 4:13 AM

DUDE. This is wrong, so very, very wrong.

On so many levels...