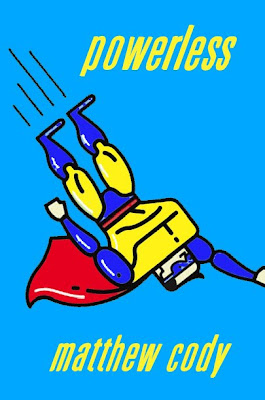 Daniel's new to Noble's Green, "The Safest Town on Earth," but it doesn't take him long to figure out why: the place is crawling with pre-teen superheroes who use their powers for good and not evil. And by crawling I mean half a dozen kids. And they don't know how they got their powers. And their powers disappear when they turn thirteen.

Nature abhors a vacuum, and where there are superpowers there is super evil scheming to bring them down. And once these teen mutants (no copyright infringement intended, I'm sure) have taken ordinary, superpowerless Daniel into their confidence you just know it will fall to him and his superior intellect to do what might and force cannot.

I'm beginning to suspect that the reason superhero novels for kids keep getting published is that they appear high-concept, and thus easier to market than "human" stories, while at the same time playing with (tired) metaphors of good and evil, teamwork, puberty, what-have-you. But these stories are all, almost without exception, as dull as dried toast and as nutritionally empty as a withered celery stalk.

As always, if you want superhero stories, you're better off with comics.
Posted by david elzey at 4:27 AM