The Brain FInds a Leg 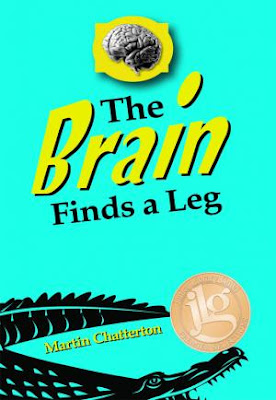 It's a teen Holmes and Watson Down Under, with a transgendered Bond villain and animals run amok!

One day, in a fit of odd behavior, a pod of whales gang up and attack a whale watching boat on Farrago Bay, Australia killing all involved. No one knows why and the mystery was never solved.

Two years later, a new kid known as The Brain arrives with an odd demeanor about him and an uncanny ability to puzzle together facts at a glance. Before long he's buddied up with Sheldon, a local whose father owned the boat that was attacked by whales, and together they set off to solve a more recent spate of animal attacks. Playing Dr. Watson to The Brain's Holmes, Sheldon becomes integral in piecing together the mystery that not only will explain what happened to his father but how The Brain lost his parents to a freak accident while demonstrating a device that would increase the power and capacity of the human brain. Naturally there is a lone villain mastermind involved, as well as a surfer who is a spokesperson for a toothpaste company, and some truly odd behavior by the local fauna.

In a word, quirky.

This is the oddest thing I've come across in a while, and I have this itchiness in my brain that wonders if there isn't something cultural that I'm missing. If there wasn't a world full of books I wasn't dying to read I might be tempted to go back and figure out why this book sat funny with me. Not bad, but decidedly off.
Posted by david elzey at 4:43 AM