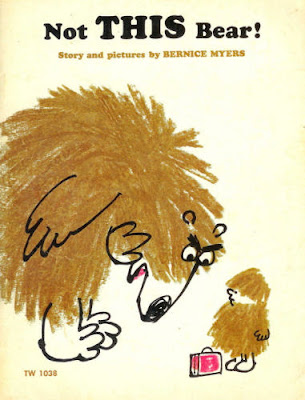 A boy has a hard time convincing a family of bears that he isn't one of them. Hilarity ensues.

Bundled in a fur coat and matching fur hat, Little Herman trudges off to see his Aunt Gert. Crossing the forest he is mistaken for a cousin by a bear and taken back to the cave where the other bears receive him like family. The boy does everything he can to convince the bears that he isn't a bear – he eats with a spoon, stands on his head, ties his shoelace – but nothing convinces the bears until the boy does the unthinkable: he refuses to hunker down for hibernation. Pulling off his coat and hat, the boy is revealed and finally convinces the bears he is not one of them. A hasty depature follows.

Myers art was the draw for me here, but I like some of the thornier aspects of the story as well. Her make crayon scribbles of brown to suggest fur with a few simple details added in ink give the illustration a very loose, kid-like feel. It's very gestural and expressionistic without being heavy. As for the story, there's a bit of that childlike fantasy to the idea of a boy being able to hang out with bears and not be in any sort of real danger. There's never the sense that he has to get away or run for his life, only that he really enjoys being a boy and not being a bear.

Of course this book couldn't be written today. The idea of a fur coat, or a boy wearing one, wouldn't fly. And putting a boy in peril with a wild animal, that sends the wrong message in a world were even safety warning tags have to have safety warnings.

Aside from the illustrations, the best thing about this book for me is how simple and entertaining it is, and well-written. I can't usually make this statement for contemporary picture books written by illustrators. So often new books seem to be overly complicated and written with no feel for story. I'll keep holding out hope for newer picture books, but in the meantime there are fine books from the past like this.
Posted by david elzey at 4:17 AM

Playing by the book said...

I recently discovered this book over at http://www.apple-egg.co.uk/ (lots of beautiful books discussed there) and have been trying to get hold of a copy ever since - I shall have to redouble my efforts now I've read your review!