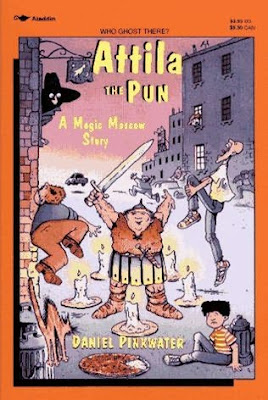 A throw-away sequel to a story about a boy, the neighborhood eatery where he spends his days, and a fake mystic who nonetheless manages to conjure the corny joke-telling ghost of Attila the Hun's younger brother.

There really isn't much more to say. Norman Bleistift is a kid who spends his summers working at a local ice cream shop called the Magic Moscow that serves some of the ghastliest creations ever served. When a mysterious stranger comes in an orders the worst item on the menu – the Nuclear Meltdown, which includes nine flavors of ice cream, radishes, peaches, four kinds of syrup, seeds, bran flakes, baked ham, tomato, English muffins, and melted cheese served in a large fried chicken bucket – Norman is both intrigued and scared. When it turns out the stranger is a regular, and that the owner often visits him, he arranges for Norman to meet him.

The stranger turns out to be an aging hippie and fake psychic who wishes he could have been a wizard. When he thinks he's found a spell to conjure up the spirit of a famous dead person he tries it out, only to fail when nothing happens at first. Later, Norman returns home and is visited by a ghost of Attila the Hun's younger brother, Bleda, who goes by the preferred name of Attila the Pun as he is a consummate 1940s Borscht Belt comedian. Unable to find a way to return him, Norman finds a way to employ him at the Magic Moscow that keeps everyone happy.

This summary might come close to being longer than the book itself. Pinkwater's fondness for short sentences and quickly telling a story are a blessing, as his absurdest comedies would become quickly weary at length. Without a female character in sight, and by leaning heavily on gross-out humor and riddles that are old even to younger readers, this is probably a book only a boy could love. That said, it's a weaker Pinkwater title, reading at times like an outline for a larger book.
Posted by david elzey at 4:02 AM

I have never understood Pinkwater's humor, and the students seem to agree with me.

I actually like Pinkwater quite a lot... when he's on. Though he's drifted a bit, a lot of his earlier books are steeped in a mixture of Dadaism and Zen that, in retrospect, may have been better appreciated n their time (mid 80s to mid 90s) and are now beginning to feel as dated as the New Romanticism pop music of the time.

But even then sometimes, as happens here, it feels like he's coasting.