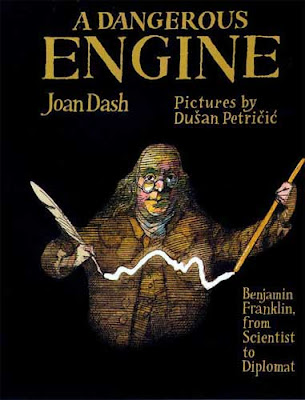 It seems impossible to make any part of Franklin's life as dull and lifeless as it is here. But I liked the pictures.

You don't tend to find newer biographies among the books available at library sales, especially about characters from history who seem to be evergreen for younger readers. Franklin's life story – even the parts he himself may have exaggerated – makes for an improbably great read, and when coupled with the loose and lively line drawings of Petricic I assumed this book would be irresistible.

Somehow I managed to resist finishing it. What happened here?

First, with a title like that, you have to open with at least a hint of either what the engine is or what the danger is. You have to. The title is a promise to the reader and when it is as concrete as this one you can't start off with a wimpy static electricity demonstration Franklin once saw. That discovery and understanding of static electricity may ultimately have lead to something that was either dangerous or machine-like, but as it stands the title is a tease that misses the opportunity to hook a reader on the first page. Or the first chapter even.

I had heard that Dash had a "flair for history and technology" (The New York Times Book Review) but I found the opening chapters a slog, and I tried to imagine what they would do to a young reader who hadn't encountered the Franklin that I had come to know through his own words. With proper guidance there is little reason for most students to venture beyond Franklin's own autobiography and published writing. Certainly not with a book that only covers half his life and yet is longer than Franklin's own account of his entire life.

That Franklin was more than one of the Founding Fathers, that he was a businessman who retired early and spent a great deal of time experimenting in science and dabbling in inventions, is certainly appropriate, but there's no reason to turn readers away at the door.

I originally suspected that I knew too much to see the book fresh, that I had read plenty of adult biographies and wasn't able to read this book without the influence of those that came before. But then that hasn't been the case in the past where I picked up biographies of figures I already knew and devoured the new angles, the new storytelling, the new approaches. And then I looked at the publication date and noticed that a book that was barely 4 years old was wedged among the discards of biographies published in the 1940s and 50s. This book had been as thoroughly ignored as books decades its senior. We can talk all we want about knowing what children should read but the bottom line is you cannot fool a kid. They know what bores them and they aren't about to check out or read a book that doesn't grab or hold their attention.

For that matter, neither will I.
Posted by david elzey at 4:09 AM