A Climb Up Mt. Barnabas 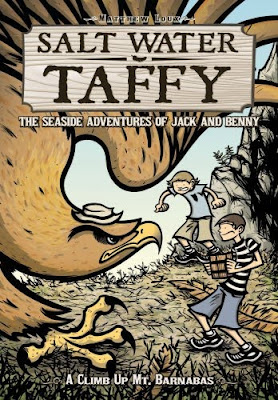 In this absurd-at-times-yet-enjoyable graphic novel, Putnam boys, believing their dad's tall tale about a hat-stealing eagle atop the mountain, make a dangerous trip to the top and discover that the tale is more than true.

Out for a hike, dad Putnam likes to hear the sound of his own voice. Even mom Putnam knows that dad is this way. Dads are like that. It's the oral tradition hardwired into their DNA. When dad discovers that his boys prefer the tall tales told by a local old salt, dad fabricates a tale of his own concerning a ginormous hat-wearing eagle that sits on top of Mt. Barnabas. The mountain has been closed off to hikers long since, and dad claims that his treasured bucket hat was stolen from the eagle when he climbed the mountain as a kid.

And so, of course, the boys have to climb the mountain as well. Because if dad's have their storytelling exploits hardwired, so do young boys to go off on dangerous excursions.

For those who haven't read the first Salt Water Taffy adventure, the fact that the boys routinely talk to animals (some of whom they now have a history with) might seem a little strange. Odder still are the lobsters who have been kicked out of the sea and dispel the "myth" that they need to live in water, or the mammoth turtle that gives rides along the sheer face of cliff in exchange for tips like a local guide. And, naturally, there really is a giant hat-stealing eagle that the boys must negotiate with.

As absurd as some of turns are, this is the second time I've been pleasantly surprised by how true to boys these stories are. Jack and Benny's feelings toward each other are quicksilver slippery, each behaving true to themselves and occasionally rubbing each other the wrong way. One frame they could be saying the dumbest things to each other, the next, they're in sync. They have fears, and are fearless; they are impulsive and don't think before they act, but when in danger are quick-thinking.

I thought I'd reviewed the first book in this series, but my archives don't seem to contain The Legend of Old Salty. So I'd say start there and stick with it – it is a little odd at first – then read A Climb Up Mt. Barnabas. Guess I need to hunt down the third Jack and Benny adventure now.
Posted by david elzey at 9:48 AM