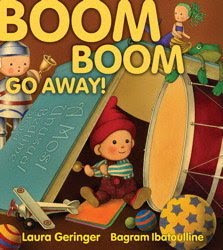 "A most unusual bedtime story" the cover touts, and I have to agree: the book does everything in its power to keep kids awake and shouting at their parents to go away and leave them alone.

A little gnome sits banging away at his drum. His mother tells him it's time for bed. His response?

This is followed by a succession of toys; an elf on a gong, a prince with a bassoon, a knight with bells, a robot with spoons, mermaids with harps, a bear with a horn, all adding their own particular piece to the cacophany, all telling their parents to hush and go away. At the end we see a small boy fading into his bed with the refrain, his toys scattered about on his bed, all quiet.

Inspired by a song the author's child learned at a Dalcroze music class, the song has been imagined here to be a bedtime story, but the original point of the song was teach rhythm and cadence and hardly includes actions and sounds conducive to quieting a child's mind for sleep. Indeed, I sincerely doubt the song was taught as a pre-nap exercise, and in the author's note Geringer confesses her own child repeated the opening verse over and over – mostly likely the outcome for any impressionable child. The fact that the refrain includes a bit of defiance, a hush and go away, would seem to be exactly the sort of thing adults would want to discourage not reinforce through the repetition of this text.

Ibatoulline's illustrations disappoint as well here. Where in Jane Yolan's The Scarecrow's Dance there was life and nuance here this are static, dead toys against neutral backgrounds that echo the emptiness.
Posted by david elzey at 1:23 PM

Does anyone know the name of the song this book is based on? I can't find the sheet music or tune anywhere.