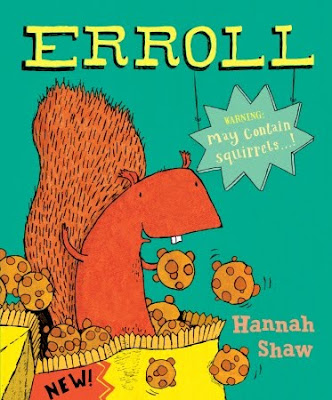 You expect me to believe that if a kid found a live rodent in his snack food that he'd befriend it until his mother told him to get rid of it? Seriously?

Sometimes I think I take picture books a little too seriously, a little too literally. Sometimes I forget that I have put on my picture book kid hat, a hat that sometimes sits casually on my head at a goofy angle and sometime sits tight and low and uncomfortable. It's a hat I sometimes forget I'm wearing, and at other times I toss with anger and disgust. And sometimes, when what I'm reading really puzzles me, I scratch my head and the picture book hat falls off.

The book opens with a boy named Bob finding a squirrel in his package of nuts. When the squirrel speaks in surprise, and introduces himself as Erroll, Bob figures he must be special and immediately does what he can to make Erroll comfortable in his new home. Bob does spend half a second trying to imagine how Erroll might have ended up in the package, but beyond that he's willing to accept this animal visit like a toy surprise inside his breakfast cereal.

Now, to be honest, I can partly relate. When I was in kindergarten I asked if I could create a squirrel home in the closet under the stairs that was underused. I promised to find a tree and build a nice home for it but was stumped by the questions I was asked when I was being humored: How would the squirrel get sunlight? What would it do during the day while I was at school? Where, living in a city and having never ever seen a squirrel in my life, did I plan to get a live squirrel from? Details, details. Clearly my mom wasn't buying the right kind of nuts from the store.

Eventually the squirrel causes enough havoc that mom forces Bob to release Erroll to the wild (and presumably she then goes in search of a lawyer to sue the manufacturer for nearly giving her kid rabies) leaving us with the twist at the end: What's inside the Chewy Crunchy Monkey Munchy breakfast cereal box? Whoa! You mean to tell me live animals inside packaged food are so common in this picture book world that it happens all the time! Quick! More legislation and food regulators! Think of the children, and create more jobs for the sagging economy at the same time!

Sorry, the picture book hat fell off again. I wish I could see past the casual animal-in-food-for-children element and find some sort of goofy fun in this picture book, but I can't. I can't even get into the illustrations as they are fussy and crowded with unnecessary details, occasionally with colors close to those of the main characters, making it difficult to know where to focus your eye on the page. It isn't an I Spy so much as a Where's Waldo situation, only in this case it's Where's Erroll and that's a problem.

Final nail: A little kid saying the name Erroll sounds a bit like "error," which maybe isn't far from the mark.
Posted by david elzey at 10:38 AM

Hi David!
I take the opportunity of this post to congratulate you for the lovely blog and the accurate reviews you always give.
I know you appreciated Luzzati in one of your posts, so maybe you could be interested in this: http://teaboxscent.blogspot.com/2010/03/tre-nomi-e-un-editore.html

thank you! and, very nice indeed, thank you again!

My pleasure, I thought you would have enjoyed it. Part of it is in english (the first animation), the others are still very well understandable. If you'll ever get it let me know if you liked it! ;-)