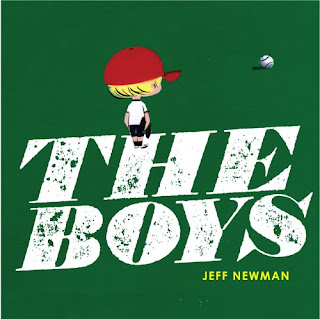 by Jeff Newman
Simon and Schuster  2010

A Mid-Century Modern picture book valentine to the nature of boys at play, both young and old.


On Monday the new kid moves to town.  On Tuesday he sets out to the park with his bat and ball to mingle with the kids of his new neighborhood but can't bring himself to join in.  He shuffles over to a park bench full of a quartet of old men who don't quite understand what's up with the kid.  On Wednesday the kid goes back to the park to feed the pigeons on the bench with the old boys who feel a little awkward that the kid has adopted them as his social group.  Then on Thursday the kid arrives wearing obnoxious plaid retiree pants and his hair slicked back and the old boys realize it's time to get this kid back on track.  Suddenly the kid is the grumpy old man on the bench yelling at the obnoxious old guys who are chasing the pigeons away on their bikes and making a ruckus at the playground.  In the end it is a game of baseball that integrates the kid with his peers and gives the old men someplace else to sit than the park bench.

That all of this is done without words is a good part of its charm. The mood on these pages is easily readable at a glance, very much character driven and clearly understandable.  This ability to portray emotions and tell stories with simple illustrations is key for younger readers to understand how to "read" pictures.  This is a key value in wordless picture books because being able to decode the language of illustrations and illustrated stories is as necessary as sight reading.  It also happens to be the element I find lacking in a lot of graphic novels put out by publishers of children's books, but that's a rant for another day.

Newman's style of watercolor - the broad brush strokes that suggest more than they define, the bold swaths of muted color - would almost fit in with the style of the independent cartoons produced by the UPA in the 40s and 50s; cartoons like Gerald McBoing Boing.  Almost, not quite.  I think there are times Newman's brush is a little too large in the scene and distracting from the more controlled character work, but it isn't a deal killer.
Posted by david elzey at 9:54 AM