The Small Adventures of Popeye and Elvis 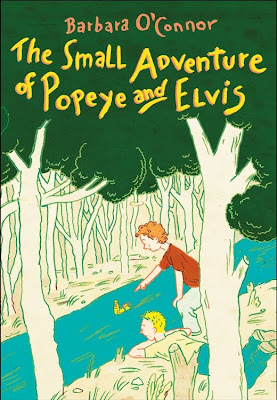 A small slice of life on a backroad of South Carolina with perhaps the most passive main character I've read in a long time.

Popeye, so nick-named when a b-b gun left it's mark on his left eye, is the kind of quiet, withdrawn kid who would hunger for an adventure if he had the gumption to do so. So when a mobile home gets stuck in the gravel road in front of Popeye's house one rainy night, Popeye's heart rate nearly increases with the possibilities. The next day five kids tumble out to explore the place where they are newly struck and - does Popeye dare to disturb the universe? - an adventure is afoot. Maybe.

A boy named Elvis, about the same age as Popeye, is among the stranded clan, a fearless, cussing, adventurer of the first degree. Popeye takes Elvis to a nearby creek and together they discover small boats made of Yoohoo drink boxes with mysterious messages inside. What do the messages mean? Where are they coming from? What's further up the creek? Popeye doesn't know because he's never thought to go exploring on his own, so it falls to Elvis to drive their exploration up the river to solve the mystery. If it were up to Popeye, who marvels at every turn at Elvis's brash language and free spirit, Popeye would sit in his room and stair at a stain in the ceiling listening to a clock going tick tick tick...

In Tolstoy's world, this is a "stranger comes to town" story, and Elvis is sort of a catalyst for Popeye's sort of coming out of his shell. I say sort of because at no point does Popeye articulate what he wants beyond vague longing, and he continues to tag along with Elvis like a pathetic puppy with hardly an original thought of his own. As the adults spend days trying to dislodge the motor home - and they're about as slow to get this taken care of as an elephant in a molasses pit, a bit of authorial deus ex machina if ever there was one - there is a palpable hope in the reader that Popeye is going to break out of his shell and stop being a wimp. But the open ending doesn't suggest Popeye has really changed and that this one quiet, sad little adventure may be the highpoint of his life.

Lacking a character-driven desire or conflict, The Small Adventures of Popeye and Elvis reads like an overly long short story, a meditation on life literally off the beaten path in a world with a vague nostalgic feel to it that seems all the more sad for what it lacks. Things sort of happen, with the overall effect being "Yes, and the point of it all is...?"
Posted by david elzey at 4:56 AM

I'm glad you are posting again. I enjoy your honest reviews and was about to start complaining that you hadn't posted in a while. Thanks for the latest and keep'em coming.

Thanks for being there! Yeah, it's taken me a while to get back into the groove, but more. Soon!