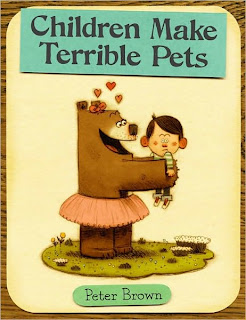 A bear finds a boy and brings him home, only to discover the truth in the book's title.

In the storytelling industry (publishing, theatre, film) there is an undue amount of emphasis placed in promoting the idea of the "high concept" story.  The high concept is easily grasped in under 25 words (under 10 if you're really good) that is open to quite a bit of action with variations on a theme. It speaks to the universal but contains a fresh twist, gives us a hero with a big problem that, in the end, is solved to the satisfaction of our expectations (i.e. generally a happy ending). High concept stories give us a hero to root for, though not necessarily one we can identify with completely. High concept permeates storytelling media because, simply, it makes money.

In children's books, though, high concept can be an iffy proposition. In order to be universal the story needs to be simplified, and the younger the audience the simpler the concept.  The twist has to be easily comprehended, the main character's problem not too big, the ending easily guessed or at least instantly obvious once revealed.  The best example I can think of at the moment is I'm the Biggest Thing In the Ocean by Kevin Sherry.  A simple boast as concept, repeated with humorous variation, a twist, and an ending that serves as a punchline. It taps into what is universal (kids boasting) and twists at a point where the main character (a squid) makes a sudden realization that flips his world upside down, but leaves us with his undaunted spirit in an unexpected-but-true-to-character ending.

This sounds like a lot of hoo-ha for a picture book, but when I finally sat down to read Children Make Terrible Pets I found myself turning the last page and feeling... empty.  I spent the next couple of days thinking "And...?" without being able to put my finger on it.  That was when I realized the problem was in the concept, and that not all high concept ideas, no matter how charmingly executed, work.

Lucy the bear is in the woods when she detects a boy hiding in the bushes nearby.  The boys squeaks, she finds him adorable, and instantly drags him home with the old twist on the "Look what I found, can I keep him, huh, huh, can I keep him?!" Mama bear of course recognizes in an instant what is the title of the book but proceeds with the "Okay, but you're responsible for him" line.  The concept is the twist on the found pet, leaving us to see how it plays out with roles reversed.  Naturally, they go as bad as expected, and Lucy must return the boy to the "wild," to his family at their house at the edge of the woods.

There is a coda, a little twist ending, right after Lucy finally agrees with her mother that children make terrible pets.  Turn the page and Lucy is ecstatic to find an elephant standing before her, the implication being that perhaps elephants make better pets.

It's a punchline, and its dissonance plays with a reader's expectations, but it doesn't fit.  A child recognizing that one animal doesn't work as a pet might naturally want to find another animal that does, one that doesn't have the same problems as the previous pet. But the humor in the concept hinged on a reversal, so in order for the twist end to work we'd need to see a double-reversal.  In theory a bear wanting an elephant as a pet could be that reversal but instead it reads as absurdity.  It would be as if reading a story about a boy who wanted a porcupine as a pet, realizing it isn't a good one, and then bringing home a space alien instead.  The lesson of what made for a terrible pet, and the reversal of he human-animal expectation, is reduced to surrealism for the sake of humor. Lucy hasn't learned a lesson, she's only learned how to set up a punchline, or rather how to set up an infinite punchline because clearly she will be able to repeat this story with every creature imaginable.

It's easy to see why this book was published.  It is well illustrated, contains a high concept that is easy to grasp by the title (thus no need to worry about how to sell it), and playfully twists a young picture book reader's expectations.  But it's got no third act, as they say, nothing really shows character growth or fundamentally changes our understanding of what's come before.  It will certainly occupy a reader's time in a benign sort of way but it is difficult to imagine it sustaining interest over multiple readings.  This is the one down side to high concept. It doesn't reward return visits, it doesn't sustain a reader indefinitely.  For that a story needs to offer something more.
Posted by david elzey at 7:58 AM

Concur. It's what we call a "Great Library Find" at our house. A book that's worth checking out and enjoying; but one that doesn't have the umph that calls for repeat reads.

I found this review highly fascinating because I enjoyed this picture book immensely, but had not thought about it in this manner. Quite an interesting take indeed. Makes me think. Thank you so much for your honest opinion! I love when people have well thought out ideas expressed so well. I have quite a lot to mull over.