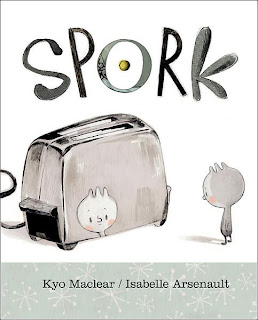 by Kyo Maclear
illustrated by Isabelle Arsenault
Kids Can Press  2010

Neither Fork nor Spoon, can the lonely Spork find acceptance in the world?

Poor Spork.  A misfit in the cutlery tray, a one-of-a-kind in a world of deeply polar divisions. In a place were different kitchen utensils can live in harmony in the drawer this misfit simply doesn't fit in.  In an effort to fit in, to choose, Spork tries on a hat but is too round to be a spoon.  Spork tries on a crown but is too sharp to be a fork.  When it comes to the table there is no call for a Spork, it's either one thing or another that is needed, but not both.

But what's this?  Something that needs a utensil that's not too round, not to sharp? Like Goldilocks, someone needs a utensil like Spork that's just right.  It's a baby.  And having found its place Spork is now happy to be Spork.

I have to admit, at first my reaction to the explanation that Spork was a little bit Fork and a little bit Spoon -- I saw Spork as a hermaphrodite! I know that's wrong, but I didn't immediately saw Spork as being mixed race which is clearly the message.  Kids will get it (I think) and this was another of those reminders that sometimes we have to keep our adult brains at bay.

That said, there is a curious message here.  Spork doesn't fit in among the tableware, tries to fit in by choosing sides, and then gains acceptance only when someone outside the kitchen finds Spork useful.  I'm not sure how I feel about this.  On the one hand it could be akin to telling kids that one day they'll realize that there's a whole world out there and they'll find their place among those who will understand and accept them.  But it also feels a bit like the cavalry coming to the rescue, like there is nothing Spork does to feel comfortable with who they are until they are appreciated by something external.

For the young, I think the "Can't we all just get along?" message is strong, and by using cutlery to tell the story it opens up the issue of multiracial image and acceptance for discussion.
Posted by david elzey at 8:02 AM

Huh. Sounds rather odd. I don't normally do picture books, but this involves sporks, so I may have to read it.

Yeah, it's the spork that draws me to this, too.