A Pet for Petunia 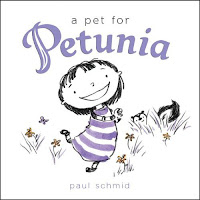 A little girl wants a pet, and she promises to take care of it and everything, but some pets just aren't meant to be...

Petunia loves skunks.  That's all you need to know.  Because when a child loves an animal at some point the question will be "Can I have one as a pet, please, pretty please?" and we all know how that goes.  Of course Petunia, and most children, learn that their ideal pet sometimes isn't s perfect as they thought.  Once confronted with the reality that her parents are right – skunks do in fact stink – Petunia accepts that her stuffed animal version is good enough until one day she encounters...

And there's the final page-turn twist.  Of course the reader is going to understand the new problem at a glance and can work out what happens next.

Schmid's illustration style is pure charm, simple conte crayon and spot watercolor in two colors, mostly purple with dabs of yellow.  The simplicity suits the story, and Petunia's expressions are easily read.  I've been a fan of Schmid's since I saw his work in The Wonder Book a while back, and I still think he has a great eye for the details in character and setting that are totally child-centric.

I think we've all been here at one time or another.  Just a few months ago with our teen daughters we had this pleading and promising going on for some new kittens.  And as a pre-school boy myself I wanted to have a pet squirrel.  I even created a squirrel sanctuary in an empty closet under the stairs. It's interesting to consider this desire kids (and people in general) have to be caretakers of animals.  There's cuteness, and companionship, but beyond that... I don't know, I find it interesting.

As opposed to high concept picture books about pets (the previously reviewed Children Make Terrible Pets) here we have the variation on the universal concept of the unreasonable pet.  The universal concept takes common childhood experiences and explores the process of discovery for the child/main character that leads them to recognize that some pets just aren't meant to be.  Of course, most readers are familiar with the potential problem – and may have had identical experiences – and so in addition to the reassurance of the lesson learned, the universal also promises a humorous twist at the end that brings the reader back to the beginning.

What makes this work is the comfort that is found in the universal themes.  There are no conceptual twist to wrestle with at every turn, just a simple narrative that allows the reader to place themselves easily in the mindset of Petunia. Done right, there's nothing wrong with simplicity.


Disclosure: book provided courtesy of the author.
Posted by david elzey at 8:39 AM

Your review confirmed that Paul's book accomplished everything I hoped it would. Simplicity is the most difficult quality to achieve yet one of the most sublime and beautiful. I'm so happy you recognize Paul's give.

full disclosure: I am his editor