Lulu and the Brontosaurus 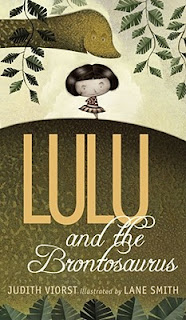 Lulu is the sort of girl who won't take no for an answer when she demands a dinosaur for her birthday so she goes out to find one on her her own. Hilarity Mild amusement ensues, with a whiff of forced nostalgia.

Lulu, an only child, is spoiled to the point that she has never heard the word 'no' before. So when she announces for her birthday that she wants a brontosaurus and her parents put their foot down, Lulu screams and throws a fit.  That the parents refuse to give in is supposed to play like a matter of practicality – she can't have one because they're extinct, or never existed depending on your viewpoint – but it is never said outright.  So Lulu runs away from home to find herself a brontosaur.

Into the forest she goes, where Lulu encounters a python, a tiger, and a bear, and dispatches them with physical cruelty. At last she finds a brontosaurus but there is a problem: the bronto does not want to be Lulu's pet.  Turns out that the bronto wants Lulu as a pet, and as we have already learned, children make terrible pets.  Unhappy with the situation, Lulu makes an escape and returns home (by way of the bear, tiger, and python, with whom she is now more polite and apologetic) but is surprised to find that the bronto knows a shortcut through the forest.  Once it is agreed that neither Lulu or the brontosaurus will be either pet they strike up a friendship and live happily ever after.

And so Lulu got a brontosaur as she wanted, just as a friend and not a pet.


Within the last year Jon Sczieska was instructing children's book authors to cut their books in half.  That was the first and most lasting thought I had while reading Lulu and the Brontosaurus.  Not that there's anything wrong with the story, despite feeling incredibly familiar, other than the fact that it feels like a picture book that no one has ever said 'no' to as it bulked up on junk food.  I suspect that Judith Voirst is among that pantheon of children's authors whose name secures a book deal sight unseen. Again, it's not a bad story, it's simply twice as long as it needs to be for what it is.

What it is... is one of those books destine for the young reader shelf alongside Judy Moody and Captain Underpants that won't satisfy because the story is too simplistic.  It is one of those books that might be mistaken for an old fashioned picture storybook except for the fact that it's the wrong size and format for the picture book shelves. It's a safe book, a grandmotherly book, a benign entertainment.

Lane Smith's black and white illustrations are nice, in a familiar sort of way. It took me a week before I pegged what they reminded me of: the illustrations for Ruth Stiles Gannet's Tales of My Father's Dragon.  If this was a deliberate homage to a quainter, older style of book (I'll research it later maybe, if I'm still interested) then I feel this is dangerous territory.  Not because of Smith's work, because I think he's pegged the style to a T, but because Viorst misses this mark by quite a bit.  In Lulu's character  there is no whimsy or innocence, just a spoiled brat in need of comeuppance. In Lulu's story there's a forced sort of understanding and very little magic between her and her "dragon." And inviting us, whether directly or inadvertently, to compare the old with the new the new will almost always loose because it comes with the force of deliberate nostalgia.  Presuming, of course, this was deliberate.

I know I caught somewhere that this was someone's favorite book, but fell flat for me.
Posted by david elzey at 8:24 PM