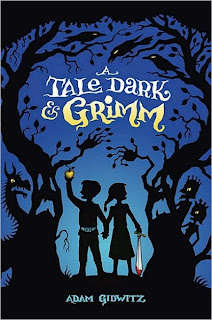 An award-worthy collection of Grimm tales retold as a continuous narrative about the adventures of Hansel and Gretel.  Bloody. Violent. Just the way Grimm's tales ought to be.

In the Kingdom of Grimm there lived two children named Hansel and Gretel.  What we are told of their story in "classic" editions of the stories is that they found a house made of gingerbread in the woods and were captured by a witch to be eaten, but managed to escape and return home.  Ah, but that's not the "true" or complete version of the story, now, is it?  It's what happened before that makes them run away, and before that it's how their parents are fated to meet.  And after escaping the witch, as they go in search of "better" parents, they continue to drift through familiar Grimm tales, losing fingers and beheading kings and battling dragons...

Not the Grimm you know?  Perhaps not Hansel and Gretel, but each of the adventures is based on tales collected by the Brothers Grimm with their gore and horror in tact.  The device of using Hansel and Gretel as stand-ins for other generic characters in the tales is actually quite a brilliant move and it gives the reader some grounding through some pretty bizarre territory.  Readers of the original tales will smile in recognition as stories yield their origins and their outcomes hurl the children further along on their quest.

In using Grimm's tales it is impossible to ignore the tales source material.  Hansel and Gretel's parents, the way they meet and the destiny foretold by three crows, betrays its Greek roots. Later, as Hansel is forced to trick the devil, echos of the medeavel morality plays can be heard.  Many of the Grimm's tales were drawn from other sources, modified and updated to meet its audience, so they can't help but carry their generational DNA from the past.  What's remarkable is how well all these influences play together with each other.  The hero's journey and the heroes themselves become our constant, our narrative point of reference, through the madness that often lives in the fairy tale realm. Hansel and Gretel leave home innocent children and return home triumphant, having earned right to reign through trial and tribulation and collected wisdom.

What I love, and what might keep this book from being considered for any children's book awards (and, yes, I do believe it deserves that sort of recognition), is that Gidwitz has retained the gore and violence of the original tales. He plays off of it with interjecting passages that speak directly to the reader, warning them that things are going to get hairy, and perhaps younger children should leave the room. Clearly Gidwitz believes, rightly so, that kids can handle the blood and guts and on some level want it. He trusts young readers – which is more than can be said for a lot of writers these days – and knows that by promising them it will be okay in the end that they can handle anything.  Things go from bad to worse, and Gidwitz clearly alerts readers along the way, but he gains more trust and respect as a storyteller by not pulling his punches and playing with the tension by humorously teasing readers with a promise delivered.

Having just missed the cutoff date for the recent 2010 Cybils I only hope it doesn't get forgotten come October when the nominations open up again.  I also wouldn't mind seeing some Horn Book love, and maybe an ALA sticker.  Yeah, I know it's early and there are still plenty of books to come.  That doesn't change anything.
Posted by david elzey at 8:46 AM

It is a 2010 book and so was considered for the 2011 ALA awards already. But I believe it still is eligible for BG-HB as they have a different calendar. And it is also, fwiw, an SLJ Battle of the Kids'Book contender!

i wasn't sure what the cutoff date for ALA books is/was, so i guess no hopes there. horn book is july-july so there's still hope...

but i have to admit it's foolish of me to hold out hope for some of these awards -- there is a very strong contingent of jurists out there who will never get past any violence in books for children, no matter how classic. i'm still marveling at tender morsels making the cut a few years back...