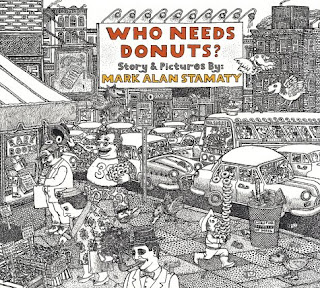 Sam wants donuts for his birthday, more donuts than his parents could ever afford.  He wanders from his suburban home to the big city and discovers there are some things more important that donuts.

Once Sam hits the city he finds a man named Mr. Bikferd who is a donut collector, wandering the city hunting for donuts and hauling them all over in his giant wagon.  Sam tags along helping collect donuts until one day the wagon breaks down.  Seeking help, Sam locates a woman who collects pretzels in a wagon of her own, and when Pretzel Annie and Mr. Bikferd lock eyes it's all over for the donut collector.  Sam now has a wagon full of all the donuts he could ever want... and he doesn't want them.

Popping up throughout is a sad old woman whose prophetic announcement at the beginning of Sam's adventure – "Who needs donuts when you have love?" – finds her life in danger when the coffee company above her sad little basement apartment encounters a runaway bull and coffee spills everywhere.  But it's Sam and his donuts to the rescue, and the realization that, indeed, there are some things more important than donuts.

Stamaty, an illustrator who for many years wrote the alternative political cartoon in the Village Voice called Washingtoon, crams so much information into his line drawings a reader could easily spend hours on each page studying what is there to find.  Absurd conversations, surreal animals, people whose fashion defies logic, there are more visual treasures to find per square inch than any other books except maybe Where's Waldo and Waldo is tame by comparison. Picture book readers of varying ages will discover different gags in the illustrations depending on experience.  Newspapers bare headlines like "Convicted Felon Receives Paragraph From Verbose Judge" probably play more to adults who would get the puns, but visual gags like a Conestoga wagon being driven by a horse in a suit who is a passenger in a convertible are accessible for all.

(I do believe you can get an approximate sense of the experience by double clicking on the image above for a larger size.)

What does any of this have to do with the story?  Nothing.  At least on the surface.  These jam-packed illustrations serve as a parallel charm to the book's otherwise simple message that sometimes wanting something can sometimes blind you to what you already have or what you might really want.  It's no mistake that all of this takes place in a hectic city full of people who are blindly going about their business, oblivious to the wonders of the crazy world around them, including an obliviousness to love.

Out of print for a long time, Who Needs Donuts? was reprinted in 2003 and can still be found.
Posted by david elzey at 8:15 AM

This is one of the trippiest picture books ever. Glad to see it here!