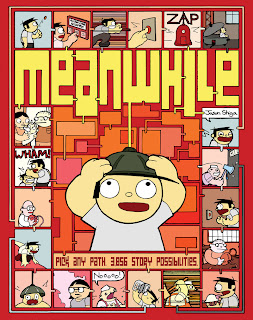 It seems like such a small decision – chocolate or vanilla ice cream? – but whichever one the reader chooses for Jimmy will send them both down one of 3,856 paths.  Some paths lead to death and the end of the world as we know it, some lead to a parallel dimension, some sort of loop back around to the beginning. Time travel is involved, and a squid (sort of). Jimmy's initial choice of flavors is what sets the story hurling toward a trio of inventions, the luck of a coin toss, and the reader's memory of an access code that alters and reshapes the story along the way.

What would happen if you mashed up a choose-your-own-adventure (COYA) story with a graphic novel?  Meanwhile is the answer.  Everyone starts at the same place, but the choices they make along the way determine the outcome of the story.  Like the CYOA stories, many of the choices lead to death and so presents the reader with challenge of making the right choices in order to survive.  The difference is that the CYOA stories left readers with an emotional or moral dilemma on which to peg their decisions, but in Meanwhile decisions are sometimes simply a question of blind luck.  Sort of like life where the smallest of hesitations can have profound effects.

Those 3,856 paths are a bit of a technical inflation: the book does not contain that many actual stories or endings.  Where some paths diverge and follow one set of story ideas they will eventually come back to a one of a few shared end strand.  I haven't mapped the book out – I'm sure that sounds like a fun activity for some people – but if you've ever wondered what a CYOA-type book looked like mapped out, check out this link. Despite The Mystery of Chimney Rock having only 44 choices and 36 endings it does add up to a crazy-big number of "possibilities."  It's no surprise that Shiga's book plays up the numbers as he is not only a cartoonist but a mathematician.

The technique for making choices is unique and worth note. Each panel of the graphic novel has a little "tube" that connects it with the next panel in sequence.  These tubes, either by choice or by necessity of space, run off the edge of the pages and onto tabs that lead the reader to the next page. Following the tabs sends the reader backward and forward (like a time traveler, if you will) through the story, but the tubes do more than that.  By directing the reader across the page in this fashion, Shiga can place three or four separate sequences on a page that may have no connection to one another.  They are impossible for the reader to ignore (like telling a jury to forget what they have just heard) and so these extraneous panels become a tease to the reader.  Will they end up back at this page in the future?  If so, how do these panels connect?  And if the reader doesn't make it back to that page, they at least have knowledge of it, which means that once they've finished one run through the story they have seen glimpses of Jimmy's parallel lives and can be enticed back into the story to see if they can find a particular strand.  This layout, while showing all the paths along the way, makes it nearly impossible to casually flip through the book.  No single page makes any sense without knowing what comes before or after which forces the reader start from the beginning and rethink their path.

But what about the story itself?  Shiga takes the element of time travel and the reader's physical interaction with the book to explain and demonstrate the concept of infinite universes existing in parallel time. Just as the reader can flip between stories and change paths if they want to see where their decisions might have lead them, the various story lines exist in a parallel world (the book) where only the separation of pages prevents the characters from seeing "what might have been." It's the kind of a thing that will either wash right over a reader, expand their thinking about time and space, or just blow their minds.

As a reading experience though the book can become quickly tiring.  Once you get the gist of several possibilities, once you've encountered a few endings or doubled over the same path a couple of times, you become tired of reading what is, essentially, a very short story with little character development or emotional investment. There is a certain adherence to fate in that there are a limited number of characters and locations that the story takes place in, suggesting that no matter which path the main character takes, they will eventually come to the same places and meet the same people.  Only the decisions change. In our daily lives we often fantasize about what small decision would change our lives and our experiences, and if I had a main criticism for Meanwhile it would be that for all its paths the scenery remains fairly limited.

This book is a natural for an entire generation wired into video games, who have learned through "multiple lives" that trial and error will eventually lead them to the most satisfying ending they can find.  It's a great approach for creatives and those who like a good puzzle with their reading.  Too bad our daily lives don't allow us to backtrack and explore alternate paths the same way.  At least not in this particular universe we're in.
Posted by david elzey at 8:31 AM