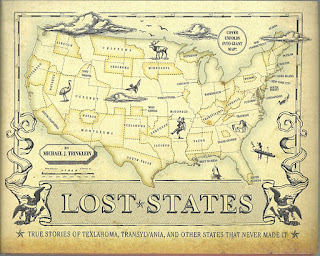 Lost States:
True Stories of Texlahoma, Transylvania, and Other States That Never Made It
by Michael J. Trinklein
Quirk Books 2010


What if the United States had accepted every proposal to form a new state? One really messed up flag, that's for sure!

Growing up in Southern California it is hard not to notice that there is a simmering animosity with neighbors to the north. It isn't so much that Sacramento, the state's northern nowheresville capitol, is out of touch with the urban hipness of Los Angeles, Hollywood, and the wealthy enclaves of Santa Barbara and San Diego counties. Nor was it the hippie-centric enclaves of Santa Cruz and San Francisco who felt that the south was nothing more than water-stealing conservatives. It was the fact that California was, and is, a "destination state" that draws immigrants from all over the country, so much so that fewer than one in seven Californians is a native. Basically, the state is full of people up and down the coast who'll never agree with one another; dividing the state into factions seems like a good idea only until it comes time to discuss how to do it, at which point things fall apart. 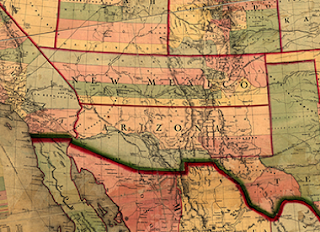 Every state in the United States, apparently, has some version of this story. Reading Lost States: True Stories of Texlahoma, Transylvania, and Other States That Never Made It is a fun little romp through the growing pains of a young nation and the people who would mold it to their personal agendas. Some of these lost states were merely boundary squabbles latter settled by politicians, others were publicity stunts designed to attract tourists or business, and still more have been proposed as a matter of political or economic practicality like the annexation of various islands for some strategic advantage. Each of the Lost States receives a brief history of its proposal and why it failed as well as a map outlining (or in most cases approximating) it's location in relation to what state is currently in its place. Many of these proposed states are clearly the results of the early land grabs and settlements of the 19th century. The really odd and interesting stories are the ones that reveal hidden, sometimes dark, histories. American Imperialism is alive and well in the proposal for adding the island nation of Saipan to the nation (or incorporating it into Guam and making an honest state of them both). The only problem is that Saipan – a slave-trading sweatshop nation that produces a huge amount of name-brand clothing with "Made in the USA" legally attached to it – would never be allowed to told what to do by a strong democracy like Guam, much less agree to US labor laws under which it would be bound.

Odder still is the former Soviet republic of Albania actively seeking to become the fifty-first state. So eager in fact that English is an official language and when the US seeks allies for foreign intervention in Iraq and Afghanistan, Albania is first to step up. While there might be some political advantage gained by having a state wedged into the Adriatic coast between Greece and Montenegro, chances are better that Russia and the European Union might see the move as an opening salvo toward world domination. As Lost States suggests, Albania courting statehood is akin to "talking about marriage on the first date. Run, America, run!"

There's a lot to be learned in this book beyond the trivial. Apparently when Texas was admitted to the Union it was allowed the provision to divide itself up into as many as four states without having to seek Congressional approval. As the book points out, this means that the area of Texas could have as many as eight senators in Washington instead of two. It seems like Governor Rick Perry should have focused his attentions on dividing his state rather than promoting succession a while back. It amazes me that provision is still on the books.


Trinklein's maps are individual and well-created for the most part. Sometimes modifying older maps, creating new maps as necessary, for anyone who loves looking at or studying maps its fun to imagine how different things would be if, say, we talked vacationing in New Sweden instead of Maryland, or went to the Grand Canyon in New Mexico, or if, somehow, No Man's Land simply remained the unclaimed panhandle of Oklahoma.

(This review is cross-posted at Guys Lit Wire today, a great resource for books of interest to teen boys and their minders.)
Posted by david elzey at 10:26 AM