Happy Belated Blogiversary to Me!

Oh, Holy Undies, how could I have missed my own 5th Anniversary?

So a quick scan of the records showed that five years and nine days ago I embarked on this journey to read, write, and review books for children and young adults. What began as an exploration to better educate myself eventually led to an MFA at Vermont College and what is clearly becoming my great second act in life. I would hardly have guessed as much, but it appears that this blog and all that has come from it was the spark that ignited the tinder of my quasi midlife crisis.


Since I didn't know it was on the horizon I haven't exactly planned anything for this celebration. Sorry, if I'd known I'd have sent our invitations and baked us all a grand and glorious gooey cake. Instead I think I'll republish my first-ever online book review of a book intended for children, something from my own childhood that made me keenly aware of a book as something other than a mere entertainment. And while you're all enjoying that I'll go look in the mirror for telltale lines of age.


What do you think, should the blog get a face lift? Can anyone recommend any good digital plastic surgeons? 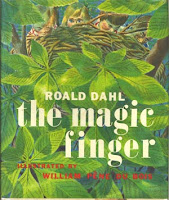 This is a story of a girl with anger management issues, a story with a high sense of justice and a low tolerance for senseless violence, and the delightfully quirky world that Roald Dahl excelled at creating. The Magic Finger is a pushing, prodding, poke-in-the-eye, accusatory allegory to war via a pointed attack on the tradition of English sport hunting. In the right light, it could also be a call to vegetarianism, though I don't know that was Dahl's intent back in the mid-60's.

Our unnamed antagonist -- who'll I call Zak for reasons to be explained -- is the type of child who is a tempest beneath a barely calm surface. When humiliated by her teacher for spelling cat with a 'k' (and Twain had something to say about this) her boiling point is reached as fast as it takes to point her finger and turn the font of derision into a house pet. In the fantasy world of children's literature this casual power and transformation is presented as a natural occurrence, one in every classroom. Zak's abilities and her unwillingness to be trifled with are the point at which we jump to the real story.

Zak's neighbors, the Greggs, are a typical English hunting family proud to return from the fields with their kill, one duck a piece. The injustice of this needless killing sends Zak to seeing colors, and in her rainbow fury she turns her neighbors into duck-sized, bird-winged humanoids for the night. And because this universe needs balance (and the Gregg's need a lesson) their house is taken over with people-sized, human-armed ducks. As the humans are chased out and fired at with their own guns they quickly take to the trees and learn the obvious but valuable lesson of seeing the world from the eyes of the hunted. Come morning the world is set to rights and the Greggs set about atoning for their hunting sins while Zak goes of in search of another family that needs a lesson.

The joy I had discovering this shortly after it was first published left a lingering mark. In some ways I prefer this to Dahl's better-acknowledged classics James and the Giant Peach and Charlie and the Chocolate Factory in that it distills the lesson and entertains without unnecessary baggage.

Sadly, modern editions of this book no longer contain the original illustrations by du Bois, favoring instead more cartoon-y illustrations by Quintin Blake who has illustrated (or re-illustrated in this case) all of Dahl's books currently in print. This apparently was Dahl's illustrator of choice beginning with The B.F.G and presumably the earlier books were re-illustrated with his approval. One of my favorite parts of the original is the doubled page that allows you to watch the school teacher turn into a cat. There is also a multi-page spread where Zak's fury changes color but are presented in black and white ink wash that may be the result of economics (color being more expensive to print) but force readers to translate colors to emotions in a way that is more internal (and less obvious) than a similar expression in Leo Lionni's Frederick.

As for Zak, unless you read the original edition you won't see a little girl wearing a sailor's hat with that name on it, pointing at the reader in an homage to James Montgomery Flagg's Uncle Sam posters of the early 20th century. This closing image appropriates the iconic military recruiting image and transforms it into an accusation addressed to the reader. Is Zak attempting to teach you a lesson for your unknown sins, or is she merely warning you to beware your actions. Written and illustrated early in the Vietnam conflict the message isn't overt in Dahl's text but du Bois illustration appears to draw a connection between the senselessness of sport hunting and mindlessness of war.

I totally forgot about The Magic Finger! Thanks for the reminder. Haven't read this one since I was a kid. Incidentally--probably because I was a kid in the 80s--the Quentin Blake illustrations are the only ones I'm familiar with...

And, not to toot my own horn, but if you decide you need a blog makeover and you haven't found someone to help yet, I did that very thing recently for Colleen on ChasingRay.com, so drop me a line if you want to chat about it. :)

My birthday present was a blog redesign, and I worked with Sheila at http://www.blogdesignsbysheila.com/ She was very helpful, and I have been very pleased with the results. I never had much luck on my own!