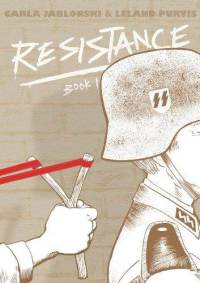 This graphic novel set during the Occupation of France by the Nazis in World War II shows the work of the Resistance movement through the eyes of children who find themselves in the thick of things.

Teen Paul finds himself the man of the house when his father is taken away by the German Occupying forces. When they Germans come and take away his Jewish friend Henri's parents Paul and his younger sister concoct a plan first to hide Henri for his own safety, then find themselves recruited to help the Resistance get information into the hands of those behind the lines in Occupied Paris.


The overall treatment of the story is fairly workmanlike. A reader with any knowledge of the Nazi occupation of France won't be surprised to read about characters who defied the Germans and worked hard to defeat them underground. That teens and young children were involved doesn't feel revelatory as children have played important roles in the history (and fictions) of all revolts. The pluck of nerve of these kids is a given; anything less wouldn't provide us with the story. But it's a story that drags, a story that is either overly simplistic or overly illustrated, depending on the spread of the moment. Scenes either don't have much impact despite their importance – like the taking of Henri's parents which takes place off stage – or their impact is drawn out over several panels where they could have been better handed with a single image. 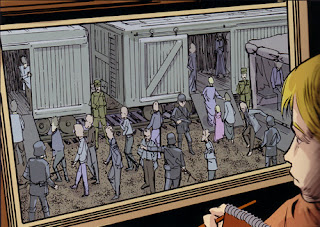 I think there's room for a graphic novel about the Resistance movement in France, and that it would make a valuable alternative for readers interested in going deeper into World War II abroad, deeper than they can in most history classes. I only wish this book, and perhaps this series (a trilogy) could be condensed into a single volume of manageable length. We'll see when its finished whether the series drags or if its merely my impatience with this first book's mise en scene for the subsequent stories.
Posted by david elzey at 9:34 AM