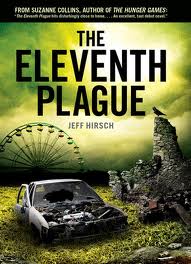 I'm going to pose a seemingly nonsensical riddle worthy of the Mad Hatter: How are good dystopian novels like gangster films from the 1930s?

In a future very near to us war has broken out between the US and China, where biological weapons were used to unleash virus that brought about a world-wide pandemic and plague. In a distant future, sixteen years after the war, chaos reigns as small enclaves of survivors eek out primitive lives as society tries to pull itself back together. Small bands of scavengers brave the wilds sifting through the detritus of shopping malls and downed aircraft looking for anything of value to trade for food or necessities. America, it seems, is little more than pockets of feudal communities clinging tenaciously to the way things were with roving bands of ex-military slave traders looking to trade the only commodity left on the planet. This is the backdrop against which The Eleventh Plague by Jeff Hirsch begins.

For his entire sixteen years all Stephen has known is the nomadic life under the direction of his ex-Marine grandfather, and the book opens with Stephen and his dad burying the patriarch who like millions before him has succumbed to the plague. There is a sense of being relieved of a burden while at the same time being set adrift. Stephen and his father will continue as they have, as scavengers looking to trade for sustenance, but is that really all they want from life?

Holed up in an abandoned plane during a storm, Stephen and his dad encounter a group of slavers with some newly caught slaves. Their moral compasses properly set, they attempt to free the slaves but are barely able to flee for their own lives. During the escape Stephen's father is injured and falls into a coma, and while nursing him he is taken by what he believes are a rival band of slavers. Instead he is taken to the town of Settler's Landing where, for the first time, Stephen catches a glimpse of what life was like before he was born.

Unlike some of the other encampments of survivors trying to make their way in the new world, Settler's Landing is engaged on returning things to as close to normal as possible. They farm, the have a school for children, kids play baseball, and they all live in homes that were clearly part of a gated community before things went bad. They are shut off from the rest of the world and doing just fine, but Stephen's life has taught him to be wary of strangers even as they have the medicine and knowledge to keep his dad from dying. Slowly Stephen accepts his place in the community, drawn to another orphan, Jenny, a Chinese girl who has a chip on her shoulder as big as they come. It is Jenny the misfit outsider who shows Stephen some of the cracks in the facade of Settler's Landing, and its her wild anti-authoritarian mischief that spins the story into it's second act examination of whether mankind is simply doomed to destroy itself.

When I first was aware of this book last fall I gave it a glance and then put it aside. It felt a little too much like well-trod territory. Then recently I overheard someone in a bookstore rhapsodize over it because "it has a positive, hopeful ending."

That got me thinking: don't all good dystopias have this sense, this need, for a cathartic ending?

The question then is: what, exactly, is a "good" or hopeful ending for a story about how human civilization has brought itself to the brink of extinction? Is it a return to the old, comfortable world we currently live in or the promise of something new learned from the ashes of the old?

I think this may be the most valuable point of conversation for teens about these dystopias they are drawn to – what exactly is it that gives them more comfort, and ending where the world will turn back to where it was, or a world that has learned and will move forward? In some ways I think this is a trick question, because in order to accept that this bleak future will bring about change is to suggest that everything the way it is now is entirely (or nearly so) wrong. And yet, with the glimmer of hope on the horizon, there isn't really a concrete sense of what that next step would be. It's like belling the cat to say "all we have to do to change things is..." but if we're so smart then why can't we change things without nearly annihilating civilization?

But I have an alternate theory about why people are drawn to these dark futures, and it mirrors a time of great anxiety in American history where stories of crime and violence engaged the imaginations of movie-going audiences of that era. Let's look back at the question I opened with.

The answer to the riddle about dystopias and gangster films lies in what people want from their narrative entertainment, be it movies, TV, or books. In the 1920s and 30s during the depression and prohibition there was a rise in the gangster movie, films that seemed to celebrate the lives of notorious criminals and fictitious public enemies. At a time when people had so little beyond their economic anxieties, there was some satisfaction in watching the stories of people bold enough to take what they wanted, by any means of force necessary. Audiences rooted for these "bad guys" as they moved from one murderous exploit to another... but only up to a point. In the end, the gangster had to die. He had to. There was no way for an audience to reconcile rooting for the bad and feeling good about it unless there was a cathartic moment of justice in the end. It was okay to ride along on the sideboards of those big cars while people were being tommy-gunned so long as we knew that the world would be put to right in the end.

And this is where I think we are with modern dystopian novels. The economy is in the dumps, wages have stagnated while corporate profits have boomed, we're actually in worse times economically than during the Great Depression, so we need some sort of diversion that makes us feel better at the end of the day. Our current anxieties about the world demand some sort of outlet. We need to see the world worse than it currently is in order to feel like things aren't so bad, and like a gangster movie, readers want to delve into these dark futures but only if they can emerge with a sense that things are not as bad as they seem. They want to emerge from the book and find some comfort in the world they currently live in, not worry about how to change it. If these dystopias truly were suggesting a global change was necessary they would set about showing readers a road map out of our current path toward these dark places, but they do not. To do so would risk becoming pedantic on the safe side and propaganda on the extreme.

People didn't leave gangster movies wanting to take up a sub machine gun to shoot up the town, just as kids who read dystopic novels don't put down the book feeling a sense of nihilistic hopelessness. This idea of these books being to "dark" comes from adult denial of just how dark the world looks to kids at the moment. Historically, teens have always felt the older generations have screwed things up and should just get the hell out of their way. So if you think a dark work of fiction is more detrimental to a child's mind than, say, our current divisive political climate or the profits-over-people mindset of big business, then, as the hippies used to say, you're part of the problem.

Fix the world and the books will fix themselves.

This review is cross-posted today with Guys Lit Wire, home to all things teen boy readers might like.