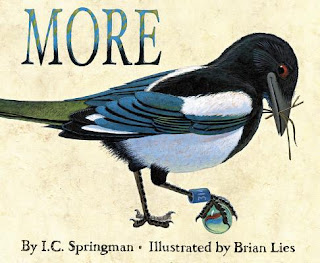 by I. C. Springman
illustrated by Brian Lies
Houghton Mifflin, 2012

It's Hoarders for the picture book set! A thieving magpie collects and collects until... well, as they say, less is more.

One of the oddest thing about reviewing  picture books is that it often takes more words to describe them than it does to read them. Quite simply we have the story of a bird with a propensity for stealing colorful, shiny things and bringing them back to his tree where they accumulate until, finally, the weight of everything sends it all tumbling to the ground. At last the blackbird is forced to accept that only a small number of things is the right amount.

For a book to illustrate the concepts of more, less, too much, and enough, More is a beautiful vehicle. The paintings have the studied care of detail painted into them yet the layout is simple enough to stay focused on the action. But from the perspective of narrative I am bothered by the mouse (or mice, as there are more than one) that acts as the blackbird's external voice or reason. I've thought about this for a while now and what I think bothers me is the dissonance between the illustrations and the cartoon-like behavior of the mice. If the illustrations were more comic the dynamic might have made more sense, but as it is the realism of the blackbird against the imploring nature of his tree-bound rodent friend reads a little like a National Geographic documentary with Disney characters animated into the proceedings.

But I do like the message of learning to do with less, and imagine many a parent will appreciate having some ammunition against young lap-sitters who might be tempted by commercial culture to want more and more and more.

Now if it didn't have Jiminy Field Mouse and his moral tacked onto it...