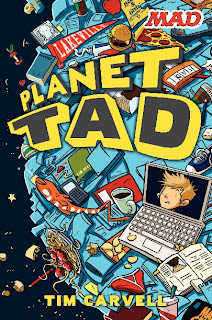 Emmy-Award winning head writer for The Daily Show! and contributor to MAD Magazine! attempts to write a middle grade book!

Sure, some of these are modifiable with adjectives like uproarious and riotous and mildly, but these are five points on a scale as exponential as the Richter scale is for earthquakes. There are degrees of Funny that lead up to Hilarious and down to Amusing, but there is a percipitous drop from Smirkworthy to Trying Too Hard. And when you reach rock bottom there has to be a point where the intended audience is left wondering: why can't they see this isn't working?

Planet Tad is Trying Too Hard to be funny.

Understand, humor is hard to pull off. There are rules for establishing a situation that appears to be normal, setting a trap of expectation that creates tension that anticipates humor, then springing an unexpected curve that relieves that tension with a release of laughter. Sometimes you have to lay down a lot of groundwork before a joke can payoff, but doing so makes the humor that much stronger. It also sometimes helps to let the audience know what to expect – give them a small taste – so they will follow you along until the jokes pay out.

Where Planet Tad falters is right at the beginning when Tad explains he has five resolutions for the new year: start a blog (which this book is a chronicle of), finish seventh grade, get girls to notice him, do an ollie on a skateboard, and begin shaving. Is any of that funny, even to a twelve year old kid? It is possible to make those things funny down the road, but there's nothing inherently funny in the list itself, and presuming this is what Tad's exploits are going to be about, well, why bother? What would be funny?

What if Tad instead decided to give himself Hemingway's list of things you must do to be a man – plant a tree, fight a bull, write a novel, and father a child. Two of these could already be incorporated into Planet Tad: he's already writing a novel via these blog posts, and at one point as part of a lesson on sexual responsibility Tad and a girl have to share custody of an egg for a week without breaking it. In an effort to end the week with an egg in tact Tad boils it, only to be discovered at the end of the week when it rolls off the teacher's desk. He boiled their kid, ha ha. How much funnier than what's in this book would it be if Tad took his "fathering" instincts to their (il)logical conclusions, trying to hatch an infertile egg, or truly becoming paternal during the week to the point where he defends his "son's" honor in a fight because someone made fun of him? Carvell sells his readers short by setting his sights too low, and the result is that the humor doesn't evoke sympathy, cringing anticipation, or even a true moment where you can laugh inwardly.

The point here isn't to rewrite Carvell's book, but to underscore just how badly he missed the mark. The meandering blog posts sound authentic in the way that kids would simply record their life events and move on, but the list of resolutions is barely thread enough to string it al together and even Tad himself seems to only casually remember what he's set out to do. The gags themselves also play out too fast, with set-up and resolution happening within a few pages. Where marketing for the book touts this as being squarely aimed at the Wimpy Kid crowd those intended readers will be sorely disappointed that Carvell can't pull off what Kinney did with jokes that were set up pages and pages earlier that delivered their punchlines when a reader least expected it. Wimpy Kid's humor was droll, dry, and delivered with expert timing; Planet Tad rushes the humor (what little it has) so fast and moves on to the next gag that readers might not even realize there was a punchline to the gag at all.

Fortunatley, kids are smart, and when faced with Trying Too Hard humor they know when to say "Why can't they see this isn't working?"

And then they'll move on to better, funnier books.
Posted by david elzey at 8:53 AM