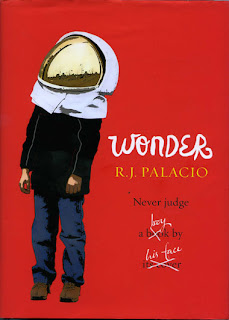 Yesterday I wrote a "review" of R.J. Palacio's Wonder wherein I was trying to work out what I was thinking on the fly, on the screen, sorting out my thoughts in public. even as I was committing the post to go public I was still left with the feeling that I hadn't really scratched the surface. I've been trying to stay as close to gut-level in my reactions while at the same time shortening my reviews to something a little more manageable; people respond better to shorter reviews, or so I've been told, and anecdotal reader response tends to bear this out.

What I realized during the day was that I hadn't really discussed the book itself, in particular the elements of craft that impressed me, and perhaps an examination of how the book falls into the mold of a potential "classic" by virtue of possessing a certain quality that, for lack of a better term, I simply call award-bait. I don't mean that in a mean way, there are just some books that have a tone and feel that sits just above all others in such a way that they attract the attention of people who give awards for noteworthy books.

I have to admit, the reason I'm coming to this book so late from all the hoopla of its initial release is that I've found more and more I find the hoopla surrounding a book's release tends to be a distraction. I wanted to get to a point where I couldn't really remember what I'd heard in order to delve into the book with fresh eyes. I'm glad I did because there were some nice surprises in store.

First, Augie Pullman has a great voice. He's optimistic yet realistic. He knows his deficits but underneath he's just a kid with the same worries as other kids entering middle school: Will he be able to make new friends? Will there be any kids as into Star Wars as him?

Will these kids stare and make fun of him the way other kids have his entire life?

That Augie discusses his facial deformities and surgical procedures with a detached boredom doesn't remove the fact that emotionally he knows he trapped behind this mask forever. He knows he'll never be normal but that doesn't stop him for wanting, just once, to be treated for who he really is and not what he looks like... and certainly not out of pity. Palacio finds a nice, light touch for Augie's voice, a balance that straddles his inner and outer worlds.

The biggest, and most welcome, surprise comes when the point-of-view shifts. I realize I've just gone ahead and made it so someone wanting to read with fresh eyes as I did will now have to wait until they have forgotten this review, but such is the nature/danger or reading and writing reviews.

The shift in POV solves a problem with most first-person narratives in that it gives the reader insight to the other characters Augie interacts with, and in particular provides elements of the story Augie couldn't possibly know. This is a great trick because it retains the intimacy of Augie's world and provides background and depth without either diluting or undermining his perceptions. His saintly sister Via enters high school and goes through an emotional roller coaster of emotions that Augie cannot fathom. Nor can his parents, it seems, and it isn't until we hear Via's own take on events that we learn that her sacrifice has come with a price. This shift happens again when his new friend Jack Will cannot figure out why Augie is giving him the cold shoulder (but the reader knows), and when Via's boyfriend plays a small role in undermining a bully at Augie's school, and when his friend Summer chronicles their work on a Science project. The effect is a bit like a documentary where the narrative shifts according to which person has the most insight into an event. It works because, as with Augie's voice, it is carefully crafted and not gimmicky.

As I hinted at yesterday, the one false note is the ending, which isn't so much deus ex machina as it feels too good to be true. And by that I mean that what makes it untrue is that it quite simply is too good. Too good in the sense that Augie's soaring triumph at his middle school seems to set him up in a way that is potentially dangerous for him down the road. If it sounds like I'm concerned for the imaginary future of a fictional character, I am, because in order to buy the rest of Augie's story I have to care enough about him to not want him given a false hope. Yes, I want uplifting, but I also want honest, and it matters in a story like this. Everything about Augie and his world has been rendered in a realistic and unflinching manner, and then comes an award ceremony that doesn't simply elevate his self-esteem but paints an entire school as having been moved by Augie's humanity. The totality of this communal change elevates Augie's personal moment to something that, to my sense, felt slightly messianic. Augie is a special boy, indeed, but is he really that special?

Without digging up the reviews I so carefully avoided or deliberately forgot, the hoopla for Wonder is deserved, but with the caveat that the book serve as a point of discussion for young readers and decidedly not as a lesson. There is nothing more I hate than watching a solid book with a unique character used to club innocent children over the head with the weight of heavy-handed moralizing and guilt-inducing pity.

Which, sadly, tends to happen with books that get little gold or silver medals affixed to their covers.
Posted by david elzey at 8:42 AM