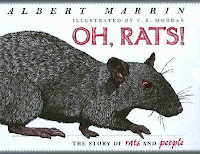 The Story of Rats and People
by Albert Marrin
illustrated by C.B. Mordan
Dutton / Penguin 2006

Is there any pet more widely considered vermin? The nonfiction picture book examines the facts and myths surrounding the rodent people love to hate.

Stating with a tale from his own life, Marrin recounts how he was playing in a wood pile as a kid when he first came face-to-face with rats. Out his fear his father offered this wisdom: "Learn about them: you'll feel better."

With that we embark on a journey to learn everything we can about rats. We learn their history and evolution, their ratty ways and how they've interacted with people (and the ways people have interacted with them), we learn how they are pesky and how they are yummy, their eradication and their cause in spreading the plague, and even how they have been used (inadvertently as well as deliberately) in scientific research. It's seemingly very thorough for a book that could serve as a first serious introduction to a child learning about – or how to get over their fear of – rats.

One of the elements that takes the edge off the book is the fact that it is illustrated with woodcut-like illustrations, similar in style to the work of Barry Moser. This one-step removal from actual photographs makes the rats seem less threatening though the detail on their faces and the red spot color on the mostly black-and-white images gives them a bit of realism that may still make some queasy. I would have preferred a little more interplay between images an texts – as opposed to small inset circles and sidebar illustrations – but as presented the images and text are still handsomely laid out and designed.

Occasionally the text felt like it drifted between different aged readers. The chapter on rats and the plague seemed to trade on the reader's knowledge of a higher vocabulary and reading sophistication while other chapters contained text that bordered on condescension. Take

Yersina pestis is a bacillus belonging to the family of bacteria shaped like thin rods. Visible only under a microscope, a single plague bacillus is 1/10,000th of an inch in length.

The famous Larousse cookbook includes one for "Grilled Rat Bordeaux Style. Bordeaux is a famous place.


Indeed, Bordeaux is a famous place, but a sentence like that has no meaning without context, and even the description of the wine cellars that follows fails to explain the significance of Bordeaux, the cookbook, and what it being famous has to do with rats. Do the rats know Bordeaux is more famous than other wine regions? Does Bordeaux somehow attract more than the usual amount of rats to its cellars? When contrasted with the chapter on the science of the plague and how the rats transmitted the disease, the text in the cooking chapter and elsewhere wavers between reducing facts to their simplest book report factoids and deeper explanations worthy of a kid deeply interested in the subject.

There are other moments where it feels like information has been simplified or facts generally lumped together for the sake of simplicity. There are, according to this book, only two families of rats, though many types of rats are grouped together on the generic terms "black rats" and "brown rats." Any reader clearly interested in rats would want to know these differences in families, just as they would with subjects like snakes, sharks, bees, and so on.

These points aside, I love this book for not shying away from touchier elements, such as people eating rats and details concerning scientific experimentation. It is reasonably well-rounded and keeps its balance between the earnest, respectful, and gross elements that a subject like rats arouses in readers.