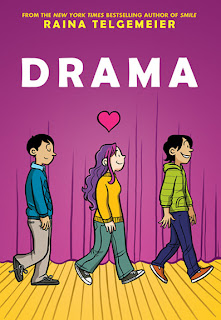 Romance and friendships are tried and tested during the production of a middle grade play where everything is one giant emotional... drama.

Callie is crushing on Greg, and after he breaks up with his girlfriend Bonnie it looks like she might get a chance at him, but after one sweet kiss it goes south when Bonnie and Greg reunite. Good thing there's the upcoming play production to distract Callie from her short-lived non-romance. Better, the play is a Southern love story and Callie is chock full of enough ideas as part of the stage crew to put Greg quickly out-of-mind.

While posting the announcement for auditions Callie meets brothers Jesse and Justin who have their own interests in the play and in short order they all become close friends. Things start to get messy when Bonnie tries out and gets the lead in the play opposite heartthrob West and they start dating. No, things get messy when Callie starts falling for Jesse who has his own heart set on... West? And after the Spring formal, when Greg realizes he's been a bonehead by letting Callie go will she forgive the way he's treated her in the past and consent to be his new girlfriend?

So much middle school drama!

There's a lot of shifting alliances and subtle game-playing that makes Drama feel natural, warm, and authentic to the middle school experience but at the same time Callie ends right where she started, without a love to call her own, without the one thing she had been wanting all along. Has she grown because of her experiences working on the play? Certainly, and she's perhaps learned a thing or two about the heartbreak of choosing the "wrong" guy more than once. But the story ends with Callie and her extended stage crew friends toasting their triumph and making plans for next year's play. She's come full circle but she's right back where she started and it feels extremely anticlimactic.

I had this same sense after finishing Telgemeier previous graphic novel Smile, this sense of a time captured in amber but frozen in a way that left it life-like and lifeless at the same time. Both books read more like static snapshots in a private photo album rather than narratives full of characters who experience growth. Both books ring true because they are true-to-life, but in the same way that a diary can be a true record of events without a real or strong narrative through line. You can follow all the character's emotional upheavals, see everyone interact, get come closure on all the open issues, and still not feel like anyone's really changed.

Unless I've misunderstood and the one true love of Callie's life is the theatre, in which case the story has a bit of an "and then I woke up" feel to it. But I don't think that's was the intention. The thing is, there are plenty of examples of this kind of backstage mixed-up romance, and they tend to be MGM musicals from the Freed unit back in the 1940s and 50s. The "let's put on a show in the backyard" Andy Hardy movies with Judy Garland and Mickey Rooney are cut from this cloth, as is another Judy Garland vehicle, Summer Stock. But these films knew the audience was there for the singing and dancing and didn't hold out for great character revelations. Perhaps that's what felt missing to me, that the graphic novel with a backstage setting didn't have enough singing or dancing? Yes, that's ridiculous of me, but at the same time it makes sense; at least in the musicals there is a sense of emotion conveyed in the song and dance portions.


Among middle grade graphic novels I think there is a lot of great opportunity for realistic contemporary stories like Drama, but I think I'd prefer the ones aimed at a girl audience not focus on romance. That's just a preference, not a scathing indictment.

How long, I wonder, before a true graphic novel wins a Newbery? Or is that just out of the question?
Posted by david elzey at 8:52 AM