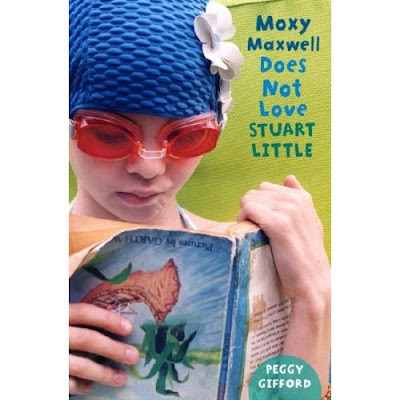 Indeed, Moxy Maxwell loves anything but reading the single book she was assigned to read before the first day of school. After a full summer of procrastination Moxy finishes her vacation with a last-ditch attempt to keep her from reading Stuart Little: She's decides to grow a peach orchard to fund her college education, thus proving she is far too intelligent to read the book while saving her parents the burden of paying for education.

But rather than plant the orchard herself Moxy gets her friend and her sister to do it, thus flooding her mother's prize dahlia garden with the garden hose leaving the dog's a giant mud pool to eagerly dig into. Overtaxed from eating several peaches (how else to start the orchard?) she settles into the backyard hammock fully intending to read Stuart Little. But the book's not there. She hasn't see the book in days, and her mother has finally lost all patience.

Later in the day Moxy is to join her synchronized swimming class for their final presentation in which she will play a flower petal. There is a party planned for afterward but Moxy's luck has run out and the much-promised "consequences" are being enforced. Instead of going to the party she is forced to read the book, staying up late the night before the first day of school in order to pass her test on her summer reading. Turns out, once she starts the book, that she doesn't, indeed, like it. In fact, she doesn't understand why she put it off for so long.

I think any parent with a child who has summer reading will relate, and perhaps so will some of those young readers. Moxy gets off easy with only one book -- my kids had one required and four or five "elective" books to down during their summers before third grade -- and there's no sense of Moxy reading anything else. She spends the summer carrying the book around to read when "in case" situations appear, but they never seem to materialize. Again, this is a foreign idea in our house, but I suspect there are plenty of Moxy's out there.

The book is a much faster read that it appears, given that some chapters have titles longer than their accompanying text (Chapter 7, In Which Moxy's Mother Says No is followed simply with the dialog "No."), and it certainly is much lighter in subject matter than most books that appear on summer reading lists. Were it not for the artificial chapter breaks and rambling distractions the book could be condensed into a very good, humorous short story. A beach read for the third grade set, perhaps?

Actually, this is more like one of those confections a child gobbles while they are killing time in the library. Easily taken in one sitting, there isn't even the need to check it out much less own it. Perfectly acceptable for the gooey, summery marshmallow fluff it is.

Due out in early May.
Posted by david elzey at 6:14 PM