Hours of My Life I May Never Retrieve 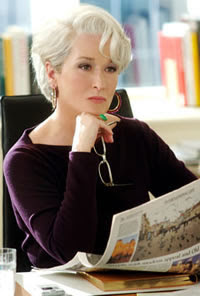 It has been a long time since I've seen a movie that made me yearn, nay ached, to to have those precious lost minutes returned to me.

I watched The Devil Wears Prada two nights ago and I'm still feeling the loss.

Years ago when I was reviewing movies for fun and non-profit there were whole seasons filled with dread as Hollywood found ways to fill the calendar year with movies they could not justify throwing into the trash. The early months of January through March are a sort of wasteland while the industry readies itself for the annual gift of collective log rolling which is the Academy Awards. As spring comes into view movies tumble out of the festival circuits and into the movie houses where some writer-director's self-indulgent wanking gets confused with art. And foreign films, mustn't forget those, as they poke their heads up from behind the hedges hoping not to get slaughtered in the pre-summer movie blockbuster assault.

And when you're watching three to five new movies a week your bound to come across things committed to celluloid that could make you weep for those precious lost minutes. Much the same way you can occasionally pick up a book and weep for the tree that gave up its life for results that insult its memory.

Under most circumstances I would never have chosen to see The Devil Wears Prada. I did so with a reluctance that I cannot touch or name except to call it The Sixth Sense. The way a child sees dead people I can see a dead movie. I don't actually have to see the movie in question, in fact I can see as little as 30 seconds of a preview on television, or read the testimonials in a newspaper ad, and I know there's a little brown shark in the bath water.

I suppose, if pressed, I could say that I remember seeing the book in stores when it was first released and, after a glance at the cover art, could have predicted the premise if not the entire plot. So, yes, that could have prejudiced me against the movie. But the curiosity factor was still there, a clever device created by studios and casting directors whereby they lure actors into these movies specifically to fool people like me who should know better.

Why would Meryl Streep be in this movie if there wasn't something to it? And Stanley Tucci, he's never really done something strictly for the paycheck as far as I can remember...

Ah, but see how cleverly they have worked their Hollywood pixie dust! By cloaking Ms. Streep in fine Italian sheepskin they have created a situation where, indeed, she does seem Oscar worthy.

But only compared with the rest of that movie. She isn't even a candle's wisp against the raging gale force wind that is Helen Mirren or the class five hurricane that is Dame Judi Dench. A good actress, yes, but an Oscar nod for a one-note smolder? Please. My best guess is that the Academy felt a little funny not putting up at least one token American, but that goes into politics and would further take me off my already diversionary course.

Afterward there wasn't even the regret that I might have better used the time reading or cleaning my shower but an actual loss, an emotional depression.

And the next night I realized that after all these years it was time to finally give up on 24. Jack Bauer and the CTU gang have lost any pull they once had and I can no longer justify giving them the space of an hour a week. I had hopes that Aaron Sorkin's Studio 60 might serve as a soothing balm after 24, a nightcap as it were, but like that mislaid glass of champagne you find several hours after the party has started the show has quickly grown flat, tepid and leaves an aftertaste like Old Spice.

I never used to watch this much TV, in fact I went through most of the 1990's without using my television as anything more than a monitor for movie watching. Strangely, I didn't seem to miss much. I found I could keep in touch with popular culture through Entertainment Weekly and sound intelligent around the water cooler and at parties and no one was the wiser.

And I got a lot more reading done.

Perhaps, if I'm very lucky, over time I can recoup my losses through a strenuous regimen of reading. A minute here, another there, and slowly the essence of those missing minutes will be reconstituted into a rough approximation of time regathered. A leap day, as it were, as compensation for my industry and dedication.

Until the next ARC of a middling young adult novel crosses the transom, then it starts all over.