Keep Your Eye On The Kid 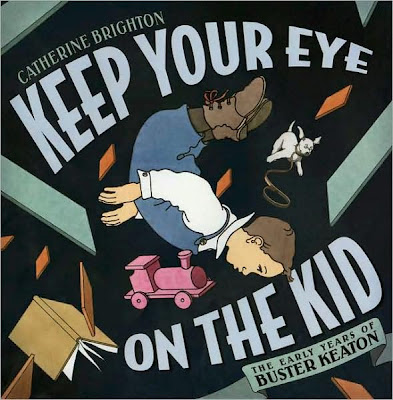 I'm all about giving kids a more rounded cultural education and I think film is one of those areas where American kids are really at a deficit. I once met a teen who was planning to study film when he graduated high school who had never heard of Orson Wells, couldn't name a single film from the 1960's, didn't think black-and-white movies were any good because "they didn't have special effects or any good equipment," and told me that the best film ever made -- without a hint of sarcasm -- was Goonies. I have since run into many kids of many ages who haven't got a clue of movies made before they were born. The only solution is the same for what we expect when teaching kids about historical figures in science, politics, and other areas of cultural history: start 'em young.

Brighton's picture book recounting of the early years in the life of silent comedian Buster Keaton is a great start in that direction. Told in the first person, which I thought was neat, we get the years from Keaton's birth to his early days in movies. He starts taking a fall as an infant down the stairs while traveling with his Vaudeville parents. He picks up his name from Houdini who uses the slang of the time for taking a tumble, or a buster. Despite laws aimed at keeping children under the age of seven off the stage his parents have him doing his prats as part of the act. At a young age he discovers the modern technological entertainment of the day -- movies, just coming into their own -- and decides that's the future. A falling out with his dad causes him to light out on his own and, with a little luck, gets started on his career in silent movies.

In the back matter (is it me, or is there more back matter appearing at the end of picture books these days?) Brighton explains that Keaton was a known storyteller, prone to exaggerating or making up facts about his life. His getting sucked out of a window during a tornado and landing without a scratch, included here for example. Makes a good story, dovetails nicely with one of his most famous gags in a silent movie when a house wall falls but misses him as he's standing where the open window lands. But is it true? No one knows for sure. Does it help balance out the story arc in a technical sense? Most definitely. Does it belong in a non-fiction picture book where a young reader is getting their introduction about an historical figure? I'm not so sure. And what of the unsubstantiated partial truths -- the possibility that Houdini didn't meet Keaton until he was grown, long after he acquired his nickname? Is this merely a way of introducing Keaton to an audience who might know Houdini and can better connect this new person in a familiar setting?

Brighton's story sense and illustration style are perfect for this book. There is a certain Little Nemo in Slumberland look to the illustrations -- rich in details and physically exciting -- that rings true with the era of the telling.

Despite some of the factual misgivings, I think this book and a couple of his short movies -- One Week at the very least - would make for a fine introduction to a slapstick comedian many (myself included) feel was much better than Chaplin.

Care for a sample? Here's are the last 7 minutes of Keaton's One Week

And if you want something a bit more substantial, rent Sherlock Jr. My preference is for the restored edition with the Club Foot Orchestra soundtrack.
Posted by david elzey at 7:50 AM

See, to my mind the fact that Brighton acknowledges the fact that these stories are perhaps not real gives the book a green card. Since it's told in the first person this is similar to Keaton telling you his own personal tall tales firsthand. Yeah, it's tricky territory, but remember the brouhaha that erupted when people discovered that the backmatter at the end of Christopher Myers' "Jabberwocky" was all a fake? At least Brighton acknowledges what facts may or may not be true. Would a kid believe it if they read it? Yeah, maybe. So I guess readers have to decide whether or not to tell kids what the backmatter even says. Is it an author's fault if an adult reader doesn't read the child all the information in the book? I mean, Brighton covered her bases, technically. It isn't too different from Meghan McCarthy's book "Strong Man" about the life of Charles Atlas. Atlas was constantly telling lies about his origin story, but if the author acknowledges this fact then are they in the clear if they repeat their subject's words? I think so, but it's an interesting debate.

No, wait, the backmatter in Jabberwocky was fake? You mean that was Meyers trying to be clever? Oh, now I hate that book eve more if that's true! I NEVER thought the illos were a good fit for the poem, but now this? Bah!

I think the problem with the authorial "I" is that when you're dealing with a real person you assume they are telling the truth. For older kids, the unreliable narrator is okay, but a younger picture book audience might not understand. I don't think what Brighton does here is a crime, I just wonder about readers.

Also, M.T. Anderson's Handel, Who Knew What He Liked plays around with the order of events in the composer's life and includes an accurate timeline in the end, and I don't have any problems there.

I guess there's that radar that shoots up now, what with all the adult bios being fabricated and all these days.

Yeah, apparently Jabberwocky's back matter was a joke. There was a huge debate at ALA Notables when the book came up. People were incensed when they heard that he'd made up stuff and printed it as fact.

I think this is a fascinating question to ask about non-fiction picture books because on my part I'm always backing and forthing. I loved the work of Brighton and McCarthy (no opinion on Anderson), but remember that book "Yellow Star" by Carman Agra Deedy? It was the picture book that did a big "What If". Like "What if everyone in Denmark had worn yellow stars during WWII?" It fessed up at the end but something about the presentation rubbed me raw. I had very serious issues with the book, and yet I have none if the exaggerations made were on the part of the subject rather than the author. Weird tricky territory. I think I'll blog about it tomorrow. Thanks!

Between this one and Don Brown's Mack Made Movies, you're absolutely right that there's lots more room on the shelf for books about movies, film, cinema. Why aren't there more such titles already, given the vast amount of money that Americans spend on movies, and the huge place those movies (even stuff like Goonies) occupy in our culture -- compared to, say, jazz?

Maybe it has something to do with the fact that even jazz can be sampled in a few minutes, and readers young and old who are unversed in the stuff can quickly get a sense of what it's about, and through that can appreciate those dozens of picture books about jazz. But the ability to easily sample -- for example -- seven minutes of Buster Keaton is relatively new, and the children's publishing world just hasn't caught onto the fact that the same sort of appreciation of vital old films and actors and directors is within reach.

I hope it's not just that editors prefer Goonies...

I bet it's a huge challenge to write about any Hollywood star from before the 1960s because publicity agents and ghost writers were so willing to tell any story that sounded good. And many previous chroniclers followed the Liberty Valence rule and printed the legend.

Just today, the NY Times had to correct its front-page obituary of Charlton Heston because he turned out to be a year older than its reporter wrote—presumably based on information in some apparently reliable reference.

Like Betsy Bird, I like the fact that this book alerts young readers to the possibility of legends. Also, by putting those stories in Keaton's own voice, it tries to reflect his storytelling rather than providing an authoritative, omniscient narration.

I am just learning of this book and am thrilled to be. In fact, so thrilled I fired off an email to Ms. Brighton even though I haven't read the book yet.

I'm a passionate advocate for picture book biographies on pioneers from the popular arts. Seems the majority of nonfiction picture books on our creative heritage focus on classical composers, which is of course important and wonderful. Yet I love seeing more contemporary figures from other disciplines like Buster Keaton and the notable names of the aforementioned Mack Made Movies, Strong Man, Different Like Coco, and The Boy on Fairfield Street.

None of us knows which of us will become legends. Up until the present era, most people, even some talented and successful people, lived largely undocumented lives. Or those documents are long gone. When building up the truth of a past life, and then whittling it down for an appropriate picture book word count, we're dealing with the most delicate gossamer.

Even those of us who become "authorities" on a figure we wrote about can't know how much we actually DON'T know about that person...

So true on many points. In doing research on another figure in early film history what I have discovered is that many people in the late 19th/early 20th century took the American Dream as an opportunity to reinvent themselves: giving themselves new names, inventing whole past stories to match the expectations of a growing fan base, changing facts on whim or when it best suited their purpose.

I think it was Jean Harlow who made up a childhood of poverty because she recognized that her adoring public didn't want to read that she received an ermine throw from her grandfather... at the age of five.

But, again, my point here is that Brighton uses the first person, and that "I" is very powerful in non-fiction, especially with younger readers. Even with adults, if the "I" didn't carry so much weight, why would everyone get so bent out of shape over the exaggerations and fictions in recent biographies like James Fray's? That "I" is like a contract with the reader, and in fiction we expect an author to give us an indication when and how it can be trusted. The unreliable narrator exists, and is accepted, but the reader has to be clued in whether it's fiction or non.