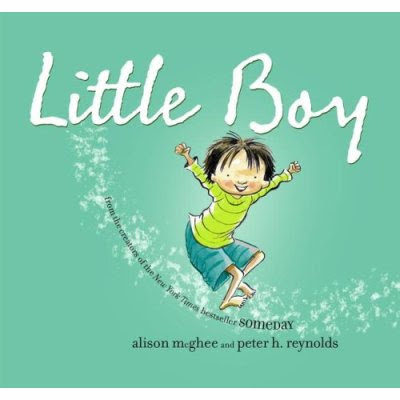 This Father's Day, when a Hallmark just won't cut it but $20 seems like too much to spend, why not give this little gem?

Generously borrowing from William Carlos William's poem "The Red Wheelbarrow," each of the rhymed sections in this picture book begins with the phrase "Little Boy, so much depends on..." to inventory the innocent mischief, imaginative play, and rituals of what it means to be a boy. All that and a big cardboard box. Reynolds illustrations are as precious as McGhee's cadences are measured, which is to say they are calculated with great care.

This is the father-and-son companion to Someday, the book about the mother-daughter bond that reads like a snake eating its own tail. With both books I can't imagine what sort of child they are intended for. Grown children? Adults with children who want an American Greeting Card memory of a time that never really existed except in a post-martini haze? Seriously, with Little Boy I can see maybe half a reading of this before the little boy being read to wants to go find a cardboard box of his own to play with rather than finish this non-story.

Beyond that, the book is a keepsake, a contemporary Norman Rockwell portrait of boyhood. Grandparents will love it, so might some parents, but it's not for children.
Posted by david elzey at 12:10 PM